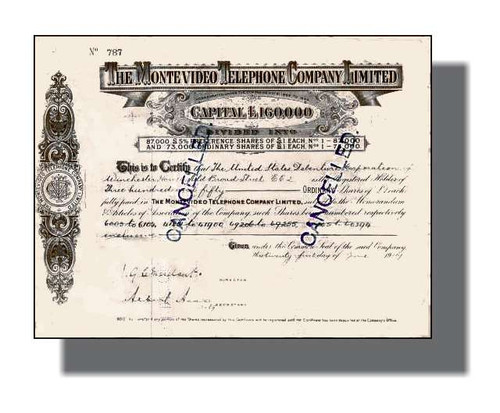 Beautiful Certificate from the Monte Video Telephone Company Limited issued no later than 1917. This historic document is hand signed by the company's officers and is over 91 years old. The Montevideo Telephone Company was established in July, 1888, to acquire the business of a local company in Montevideo and provide service in Uruguay. Montevideo is the largest city, the capital and chief port of Uruguay. Montevideo is the primate city in Uruguay, the only city in the country with a population over 1,000,000. Montevideo has a fine harbour, one of the most important in the Americas. Also, it has beautiful beaches, such as Pocitos, Buceo, MalvÃ­n, Playa de los Ingleses, Playa Verde, Punta Gorda and Carrasco. Many monuments and museums are found in the city, as well as historic buildings and squares. The city's mayor is Ricardo Ehrlich. According to Mercer Human Resource Consulting, Montevideo has the highest quality of life in Latin America. It is the seat of the Roman Catholic Archdiocese of Montevideo. OldCompany.com Research.