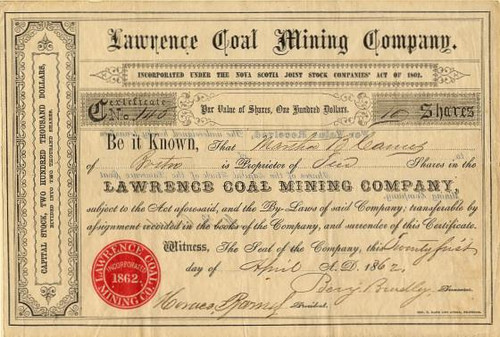 Beautiful certificate from the Lawrence Coal Mining Company issued prior to 1865. This historic document was printed by Geo. C. Rand and Avery, Printers and has an ornate border around it. This item has the signatures of the Company's President and Treasurer and is over 143 years old. Coal mining has always been a significant influence on the culture and traditions of many communities in Nova Scotia. In Nova Scotia, coal mining by Europeans has a history that goes back about 300 years. In the earliest days, the coal mining activity was sporadic and unorganized. The coal miners of that time were soldiers and local settlers. They mined the coal out of necessity, in order to provide heat for their family and comrades during the cold winter months. This type of mining occurred mostly in locations where the coal seams were exposed in the cliffs of harbors, rivers and the Atlantic Ocean. A century and a half later, in the early 1800's, authorities began to recognize the potential wealth of the coal resources within their jurisdiction. They noticed that mining activity was beginning to increase and spread throughout the region. It was evident that the activities were beginning to develop into commercial endeavors, and yet were still unorganized and unregulated. Upon realizing these facts, the authorities began the process of formalizing the coal mining industry. The Lawrence Coal Mining Company is part of this history. History from Wikipeida and OldCompanyResearch.com.