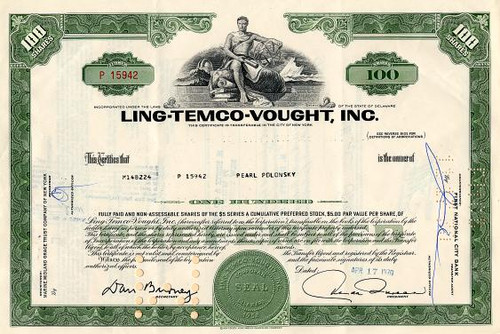 Beautiful certificate from the Ling-Temco-Vought issued no later than 1970. This historic document was printed by Security-Columbian Banknote Company and has an ornate border around it with a vignette of an allegorical man holding a globe with a telescope in the background. This item has the printed signatures of the Company's President and Secretary and is over 37 years old.

Certificate Vignette
Ling-Temco-Vought was a large US conglomerate. In 1947 entrepreneur James Ling founded his own Dallas electrical contracting business, Ling Electric Company, where he lived in the rear of the shop. After incorporating and taking his company public in 1955, Ling found innovative ways to market his stock, including selling door-to-door and from a booth at the State Fair of Texas. In 1956, Ling bought L.M. Electronics, and in 1959 added Altec Electronics, a maker of stereo systems and speakers. In 1960, Ling merged his company with Temco Aircraft, best known for their missile work, and using additional funding from insurance businessman Troy Post, they bought the famous Chance Vought aerospace firm. The new company became Ling-Temco-Vought, with a combined sales of $2.7 billion in 1969. With low interest rates allowing the company to borrow huge sums, Ling proceeded to build up one of the major 1960s conglomerates. As long as the target company's earnings exceeded the interest on the loan (or corporate bond), or the company's price/earnings ratio was less than that of LTV's stock, the conglomerate became more profitable overall. Given the fairly unsophisticated stock research of the era, the company appeared to be growing without bound, and its share prices rose. In 1964 Ling started a holding company and established three public companies, LTV Aerospace, LTV Ling Altec, and LTV Electrosystems (later E-Systems, then part of Raytheon IIS, and since 2002 has been called L-3 Communications-Integrated Systems (L-3/IS)), mirroring the original companies that formed LTV. This action raised capital, allowing Ling to raise more loans and buy more companies. In 1965, Ling added the wire and cable company Okonite. In 1967 they bought Wilson and Company, noted for their golfing equipment, but also involved in meat-packing and pharmaceuticals. He later spun each of these divisions into separate companies traded on the American Stock Exchange; they soon acquired the trader nicknames "Golfball," "Meatball," and "Goofball," respectively. 1968 added Greatamerica, Post's holding company for Braniff Airways and National Car Rental, and J & L Steel. In addition he acquired a series of resorts in Acapulco, Guerrero, Mexico, and Steamboat Springs, Colorado. By 1969 LTV had purchased 33 companies, employed 29,000 workers, and offered 15,000 separate products and services, and was one of the forty biggest industrial corporations. In 1969 investors found that the conglomerates were not growing any faster than the individual companies had before they were bought out. Share prices plummeted, sparking a bear market, and there was a general feeling that the conglomerates were to blame for the market woes. An anti-trust lawsuit was filed that year, and eventually the board of directors demoted Ling in 1970, and he left the company, to be replaced by former LTV executive, Paul Thayer. In the 1971 antitrust settlement, LTV sold its Braniff and Okonite components, and Thayer changed the company name from Ling-Temco-Vought to LTV Corporation. In 1975, after leaving the company himself, Thayer was involved in a suit over fraud in the sale of unregistered securities and was succeeded by former Xerox executive Raymond Hay. After a series of divestitures, and including the 1984 merger of the Jones and Laughlin subsidiary with Republic Steel Corporation, the company continued to exist primarily as a steel producer, renamed itself LTV Steel, and moved its headquarters to Cleveland in 1993. After suffering with the rest of the steel industry, LTV Steel filed for bankruptcy on December 29, 2000. The assets were acquired and merged with Weirton Steel to form the International Steel Group. History from Wikipedia and OldCompanyResearch.com.