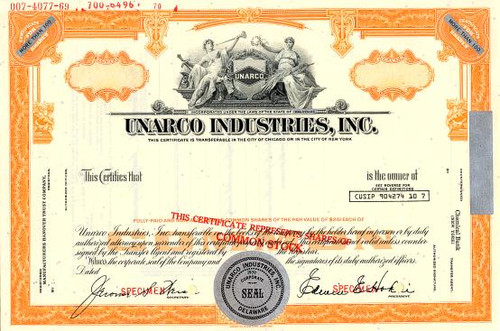 Beautiful engraved specimen certificate from the Unarco Industries dated in 1970. This historic document was printed by American Bank Note Company and has an ornate border around it with a vignette of two allegorical women. This item has the printed signatures of the Company's President and Secretary and is over 36 years old. 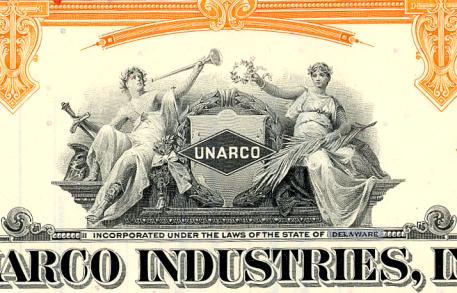 Certificate Vignette
The shopping cart was conceived in 1937 by Sylvan Goldman, one of the original self service grocery retailers who, in observing the shopping habits of his customers, realized he could provide better service and sell more groceries if only he had some means of helping them carry more merchandise. From this simple observation the shopping cart was born, along with the tremendous growth in self-service mass market retailing that continues today. Sylvan Goldman founded a company to manufacture his new idea and called it Folding Carrier Basket Company after the design of the first cart. As with most new concepts, the shopping cart was not immediately embraced by the public. Early on, some retailers even resorted to hiring models to shop with grocery carts as to "model" the behavior desired for customers. Early models were quickly refined to better meet the needs of retailers and shoppers. The basket portion became permanently attached. At this point the cart was constructed from strap metal and generally painted green. With the baskets attached it was important to develop nesting carts to save valuable floor space. The basket soon became made of welded wire mesh and the frame made from tubular steel. In 1947, designers grew more aware of the children who rode the carts while mother selected merchandise from the store shelves. They designed a child seat for youngsters to sit safely out of the way as purchases were piled high into the shopping cart basket. In 1952, a plastic piece of plastic to close off the tiny leg holes was developed for the childless shopper who used that section of the cart for purchases. By 1956, the leg hole cover had become automatic on the Folding Carrier Corporation carts. It would now return to the closed position automatically when nested, allowing the use of the child seat section to be used for small items without fear of merchandise falling through the leg holes and on to the floor. 1954 brought the availability of color coordinated cart handles with personalized store names making carts easier to identify in the parking lot and reminding shoppers which chain they were shopping at as they wheeled down the aisles. The first use of sealed wheel bearing came in 1955 which eliminated the need for lubrication and ensured smooth functioning throughout the life of the cart. In 1959 the first unitized frame was patented. In 1960, the first non-marking rubber wheels were used. Sealed swivel casters were first used in 1961 solving the same problem for caster as it did for wheels a few years earlier. In 1962, a modified acrylic coating was used over the chrome finish to insulate the chrome from harsh environmental elements thereby extending the life of the cart. The shopping cart has undergone many more changes as time has progressed. The shape has changed as ergonomic considerations were taken into account. For the most part, carts are bigger to hold more merchandise, thus enabling more sales. Today, retailers also have more choices. For instance, now shopping carts are available with wire or plastic baskets. Some changes have come because of changing trends in the retail industry. With the rising value of retail floor space, carts are stored outside in the elements more frequently. This has driven the search for better plating and alternate finishes. The retailer can choose between nickel chrome, zinc, or a rust resistant powder coated finish. History from Wikipeida and OldCompanyResearch.com. About Specimens Specimen Certificates are actual certificates that have never been issued. They were usually kept by the printers in their permanent archives as their only example of a particular certificate. Sometimes you will see a hand stamp on the certificate that says "Do not remove from file". Specimens were also used to show prospective clients different types of certificate designs that were available. Specimen certificates are usually much scarcer than issued certificates. In fact, many times they are the only way to get a certificate for a particular company because the issued certificates were redeemed and destroyed. In a few instances, Specimen certificates we made for a company but were never used because a different design was chosen by the company. These certificates are normally stamped "Specimen" or they have small holes spelling the word specimen. Most of the time they don't have a serial number, or they have a serial number of 00000. This is an exciting sector of the hobby that grown in popularity over the past several years.