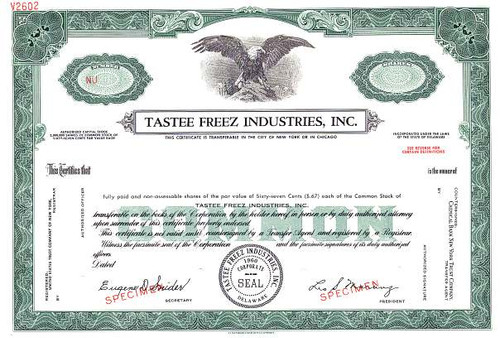 Beautifully engraved Rare SPECIMEN certificate from Tastee Freez Industries, Inc. This historic document was printed by the Columbian Bank Note Company and has an ornate border around it with a vignette of an eagle perched on a rock. This item has the printed signatures of the Company's President and Secretary.

Certificate Vignette
In 1950, an American tradition was born. Two men, Leo Moranz, an inventor and Harry Axene, an entrepreneur came together to create what would later become one of America's favorite establishments for high quality fast food and delicious soft-serve products. The two men formed a partnership to market a revolutionary new soft-serve pump and freezer which far exceeded the technology of any existing equipment, allowing for quicker service and higher quality product. Within five years after the first freezer was sold, walk-up stands bearing the Tastee-Freez name opened across the country to sell sundaes and cones to an eager public. Moranz and Axene allowed stands to use the Tastee-Freez name in exchange for rent paid on the ice cream pump needed to operate each freezer. Since franchising first gained popularity in the early 1950's, the food service industry has seen many chains come and go. Tastee-Freez has weathered the storms of an unstable economy and strived to meet the ever changing needs of its franchisees and their customers. Today, Tastee-Freez is one of the longest-lived franchise operations in the United States. Tastee-Freez, a favorite for soft-serve treats has increased its menu offerings over the years to include a wide range of options. Some traditional seasonal walk-up stands still exist in cooler regions of the United States. However, the majority of Tastee-Freez stores have evolved to become complete fast food operations. Typical locations offer a variety of breakfast, lunch and dinner items in addition to homemade gourmet ice cream and the famous soft-serve treats. Today Tastee-Freez is a part of Galardi Group Franchise and Leasing, a California based franchisor. History from company press information. About Specimens Specimen Certificates are actual certificates that have never been issued. They were usually kept by the printers in their permanent archives as their only example of a particular certificate. Sometimes you will see a hand stamp on the certificate that says "Do not remove from file". Specimens were also used to show prospective clients different types of certificate designs that were available. Specimen certificates are usually much scarcer than issued certificates. In fact, many times they are the only way to get a certificate for a particular company because the issued certificates were redeemed and destroyed. In a few instances, Specimen certificates were made for a company but were never used because a different design was chosen by the company. These certificates are normally stamped "Specimen" or they have small holes spelling the word specimen. Most of the time they don't have a serial number, or they have a serial number of 00000. This is an exciting sector of the hobby that has grown in popularity over the past several years.