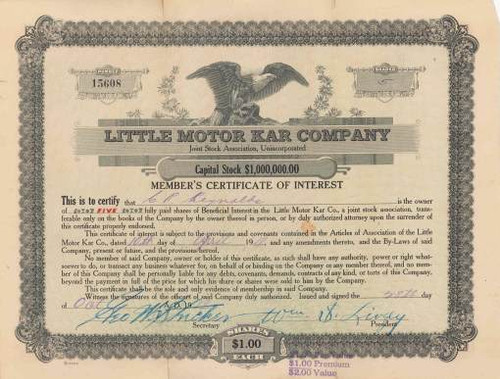 Beautiful stock certificate from the Little Motor Kar Company issued in 1919. This historic document has an ornate border around it with a vignette of an eagle. This item is hand signed by the Company's President and Secretary and is over 88 years old. In the latter part of 1919, the Little Motor Kar Company was organized. The company was successful in obtaining the financial support of the community and their product was to be called the "Texmobile", a 27 horsepower vehicle which would sell for $350. The company erected two production building units, each about 500 feet long. This enterprise was too short lived to aid the economic welfare of the community, because, in August 1920, the company passed into the hands of receivership The Litte Motor Kar Company was located in Grand Prairie, Texas in 1920. The company's factory was located at the end of SE 28th St in Grand Prairie, next to the railway. The factory in the late 1920's or early 1930 became the American Body and Equipment Co.