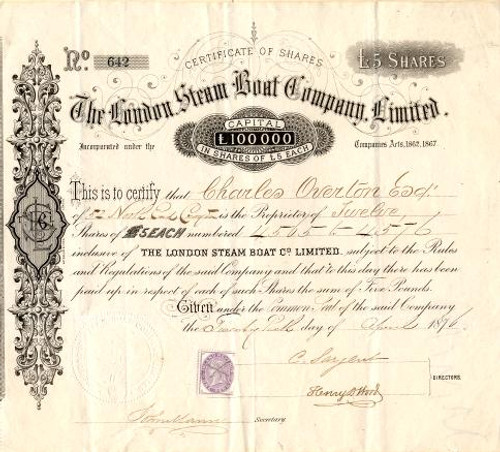 Beautifully engraved certificate from the London Steam Boat Company Limited issued in 1876. This historic document has an ornate border with the company's name on top center. This item is hand signed by the Company's Directors (C. Sargent and Henry Wood) and Secretary (John Mann) and is over 131 years old. The certificate was issued to Charles Overton, Esquire. There is also an English Penny Stamp attached to the face of the certificate.

Certificate Vignette
The Thames & Channel Steamship Co was established in 1834 to provide services from central London to Woolwich, which were later extended to the Kent and southern Essex coasts along the Thames Estuary. A London to Ipswich packet service was operated and it was this service which inaugurated calls at Clacton in 1871. The Thames & Channel Steamship Company mergeed with several smaller concerns, including the Watermen's Steam Packet Company, in 1876 to form the London Steamboat Company, which was the dominant force in the Thames estuary excursion business at that time. Steamers owned by the company included the Queen of the Orwell,Queen of the Thames, Duke of Connaught, Duke of Cambridge Duke of Teck, Duke of Edinburgh, Alexandra, Princess Alice, Albert Edward, Vale of Clwyd, and the Glen Rosa. The year 1878 saw the greatest disaster in the history of British coastal cruising when London Steamboat Company's ship, PS Princess Alice, sank after a collision near Woolwich with the loss of almost 700 lives. As news of the disaster spread, crowds gathered at North Woolwich Pier and at the London Steam-Boat Company's offices in the City. Company spokesmen read out the names of the survivors to those who waited anxiously for word of family and friends. Few were to hear good news. It soon became obvious that very few passengers had survived the accident. Before long, the vessels in the area were picking up bodies rather than survivors. Nearly 500 bodies were recovered in the first week after the collision. Some bodies were in the water for several days or even weeks before they were retrieved. Many of those who died had not been thrown into the water. Their bodies were not recovered until the two halves of the Princess Alice were raised from the Thames. It was then discovered that hundreds had gone down with the ship. Their bodies were discovered piled around the exits. The exact number of deaths is unknown but it is likely that around 640 people lost their lives in the tragedy. The company struggled financially and was put up for sale at the end of 1884, becoming the River Thames Steamboat Company, which operated for three years. Their vessels were taken over by the Victoria Steamboat Association in time for the 1888 season.