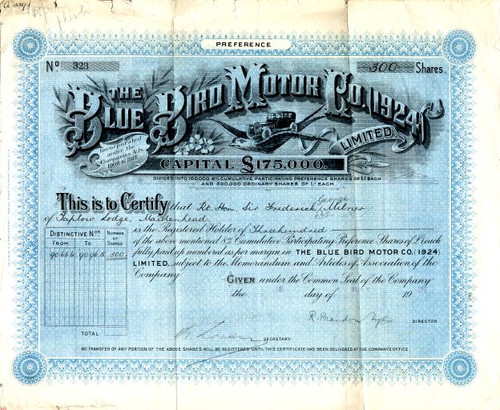 Beautiful Scarce stock certificate from Blue Bird Motor Company (1924) Limited issued in 1924. This historic document has an ornate border around it with a vignette of a motor car riding on the back of a blue bird. This item has been hand signed by the Company's Director, and Secretary, and is over 87 years old. The certificate was issued to the Right Honorable Sir Federick George Milner of Taplow Lodge, Maidhead. Some wear on top border.

Certificate Vignette
Bluebird Garage at 330-340 King's Road, Chelsea, London was at one time a garage for the Bluebird Motor Company. The garage was built in 1923 for the Bluebird Motor Company, designed to the very latest style by the architect Robert Sharp. At the time of its completion the garages were claimed to be the largest in Europe. At 50,000 sq ft (4,600 m2), there was room for 300 cars in the main garage, a further 7,000 sq ft (650 m2) was given over to workshops. On either side of the garage two further buildings contained lounges and writing rooms. The lounges were segregated for ladies, owners and chauffeurs. The land speed record breaker Malcolm Campbell was connected with the Bluebird garage, initially holding the franchise for Itala and Ballot cars. He raced both of these marques, using this hobby as a form of advertising. In 1925 he also became the agent for the newly-founded Chrysler company. As a racing driver he was less than impressed with Chrysler and imposed upon his long-suffering mechanic Leo Villa to wring just enough speed out of it to put up an impressive show at Brooklands. One of Campbell's maxims was, "Never trade with your own money. Always use that of others", which he demonstrated when the Bluebird garage folded in 1927. The shareholders, of whom (Campbell wasn't one) lost their whole investment. He repeated this with another garage at St. James's in the 1930s, again losing none of his own money whilst the backers lost £25,000. His own racing garage at Brooklands, the 'Campbell Shed' paid for from his own pocket, was more successful. In later years the building was used as an ambulance station. In 1997 the building was converted by Sir Terence Conran's Conran Group into the 'Bluebird Gastrodrome', including a Restaurant, Bar, cafe and private dining rooms. The garage area was occupied by the Sainsbury's supermarket chain as an experimental 'concept' shop. Sainsbury's withdrew from the space which made way for 'the shop at bluebird', a high-end clothes, furniture and book shop. History from Wikipedia and OldCompany.com (old stock certificate research service). Sir Frederick Milner was born in November 1849, the second son of the fifth baronet, William Mordaunt Edward Milner. Milner was educated at Eton and Christchurch College at Oxford University. He became the Conservative MP for York in 1883 defeating by a small margin Frank Lockwood, but lost the seat back to Lockwood in 1885. In 1880 Milner married Adeline Gertrude Denison, the daughter of William Beckett-Denison, the MP who he had followed as the MP for Bassetlaw. Sir Frederick Milner was the Conservative MP for York from 1883 to 1885 and for Bassetlaw from 1890 to 1906, having in 1904 being appointed at a Privy Councillor. After leaving Parliament due to increasing deafness, he was interested in the welfare of disabled soldiers, and spent much time to further their interests. Milner died at the age of 81 in June 1931, and was succeeded in his baronetcy by his only son, William Frederick Victor Mordaunt Milner. A school, the Sir Frederick Milner secondary modern school in Retford, Nottinghamshire was named after him. background from York History.