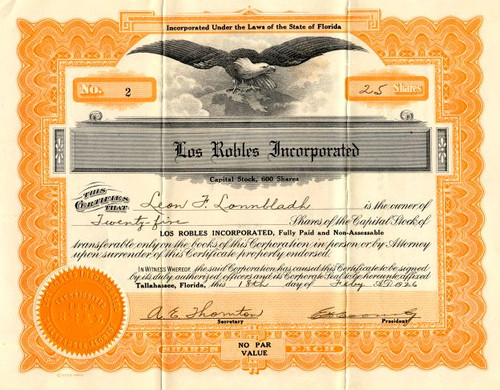 Beautiful certificate from the Los Robles Incorporated issued in 1926. This historic document was printed by GOES and has an ornate border around it with a vignette of an eagle perched on the world. This item has been hand signed by the Company's President, and Secretary, and is over 85 years old. The certificate was issued to Leon F. Lonnbladh and is endorsed by him on the verso.

Certificate Vignette
The historic Los Robles subdivision, just east of Lake Ella and adjoining midtown, was developed beginning in the 1920s and began a trend of expansion to the north of downtown. Los Robles is one of Tallahassee's oldest neighborhoods, created in 1926 on a section of land between Thomasville and Meridian roads The Los Robles Gate is a historic site in Tallahassee, Florida. It is located at the intersection of Thomasville and Meridian Roads. On September 21, 1989, it was added to the U.S. National Register of Historic Places.