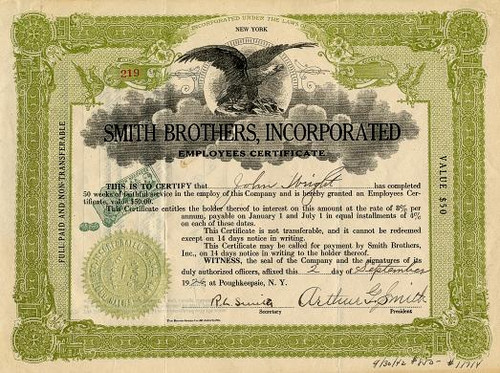 Beautiful certificate from the Smith Brothers issued in 1926. This historic document was printed by Broun-Green Company and has an ornate border around it with a vignette of an eagle and an under print of a box of Smith Brother Cough Drops. This item has the signatures of the Company's President, Arthur G. Smith and Secretary, R.L. Smith and is over 81 years old. 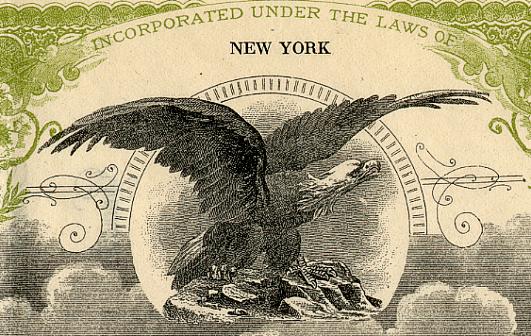 Certificate Vignette
The Smith Brothers were makers of cough drops. William Wallace Smith I (1830-1913) and Andrew Smith (1836-1894) were the sons of James Smith (c1800-1866) of Poughkeepsie, New York. James' family had emigrated from Fifeshire, Scotland, in 1831, and James had emigrated from St. Armand, Quebec in 1847. In New York, he opened a small restaurant, ice-cream parlor, and candy business, called "James Smith and Son". James Smith bought a cough drop recipe from a peddler named Sly Hawkins. In 1852, James developed lozenges and advertised them in the Poughkeepsie paper selling them to those "afflicted with hoarseness, cough or colds". William and Andrew inherited the business after their father died in 1866. The brand was then named "Smith Brothers Cough Drop". In 1872, to prevent drug stores from selling generic lozenges, they developed one of the first factory filled packages with trademark branding. On the packaging the word "Trade" appeared under the picture of William and the word "Mark" under that of Andrew, they were then incorrectly referred to as Trade Smith and Mark Smith. Andrew died in 1895, and William continued as president of the company almost up to his death in 1913. William was succeeded by his son, Arthur G. Smith (c1875-1936), who continued to expand the company by adding menthol drops (1922), cough syrup (1926) and wild cherry drops (1948). Arthur G. Smith had two sons: William Wallace Smith II (1888-1955) and Robert Lansing Smith (1891-1962). The trust funds that owned Smith Brothers stock in 1963 mergered their company with Warner-Lambert. The last Smith Brothers Cough Drop manufactured in Poughkeepsie was made in 1972. They were then after manufactured by F&F Laboratories in Rockford, Illinois. 1830 Birth of William Wallace Smith I 1831 Emigration from Scotland 1836 Birth of Andrew Smith 1847 Emigration from Canada to Poughkeepsie, New York 1852 Cough drops advertised in newspapers 1866 Death of James Smith 1870 Trademark bill defeated 1872 Prepackaged cough drops introduced 1876 Trademarks recognized 1877 Smith Brothers trademark registered 1888 William Wallace Smith II born 1891 Birth of Robert Lansing Smith 1894 Death of Andrew Smith 1913 Death of William Wallace Smith I 1922 Menthol drops introduced 1926 Cough syrup introduced 1936 Death of Arthur G. Smith 1948 Wild cherry drops introduced 1955 Death of William Wallace Smith II 1962 Death of Robert Lansing Smith 1964 Brand is sold to Warner-Lambert 1972 Manufacturing moved to Illinois