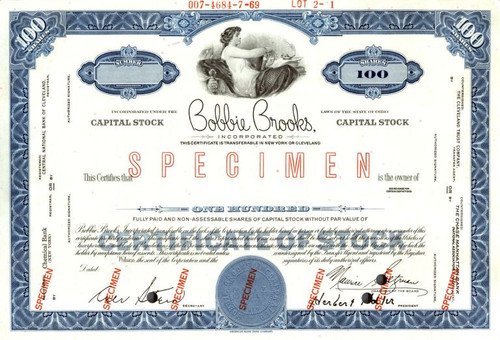 Beautifully engraved specimen certificate from the Bobbie Brooks, Incorporated printed in 1969. This historic document was printed by the American Banknote Company and has an ornate border around it with a vignette of an allegorical woman sitting back next to a lamp. This item has the printed signatures of the Company's officers. 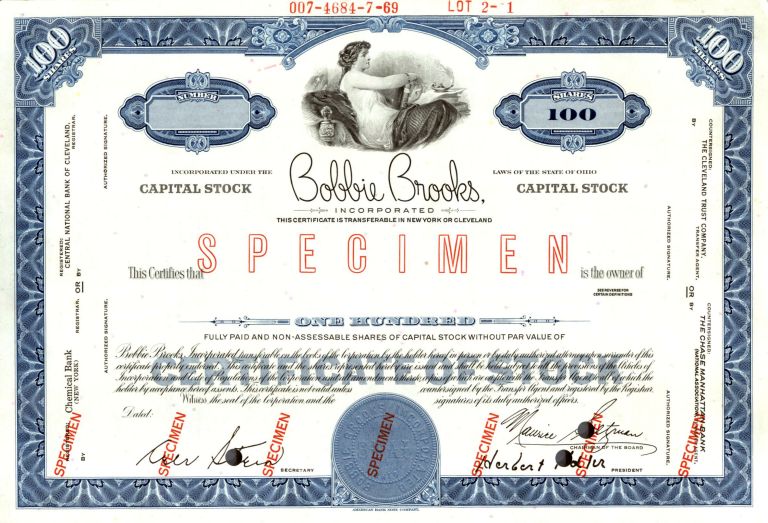 Certificate
BOBBIE BROOKS, INC., a leader in the production of women's apparel, was established by MAURICE SALTZMANÂ and Max Reiter as Ritmore Sportswear, Inc. in a loft in the Bradley Bldg. on W. 6th St. in 1939. Beginning with a $3,000 investment, they built the company into a multi-million dollar operation within the next 15 years. In 1953 Saltzman bought out Reiter's share in the company for $1 million and the firm became Bobbie Brooks, Inc. With offices at 3830 Kelley Ave. and a plant at 2230 Superior Ave.,Bobbie Brooks produced and sold stylish clothes for teenage and junior-miss girls, coordinating the styling, colors, and fabrics. Eventually, the company expanded its line to include apparel for women 25-44, and added production divisions in other cities during the 1960s. However, Bobbie Brooks encountered serious financial difficulties in the early 1980s and filed for bankruptcy under Chapter 11 in Jan. 1982 in order to reorganize. After the company emerged from bankruptcy, Pubco Corp., a holding company with printing and real estate operations, became a major shareholder in Bobbie Brooks; Pubco's Robert Kanner took over as president in 1985. Though most of the company's production was now carried on in the South, its headquarters remained on Kelley Ave. in Cleveland. In 1986, Bobbie Brooks announced that it would stop making its junior and misses lines, in order to focus on clothing for women. The following year, the company earned $4.3 million on sales of $127.7 million, and founder Maurice Saltzman resigned as company chairman. By 1988 Pubco and Bobbie Brooks were interlocking companies, and in 1992 Pubco acquired majority control of the firm. After acquiring Buckeye Business Products in 1994, Bobbie Brooks continued to diversify. By 2003, the company had interests in retail and commercial printing, and continued to supply women's apparel to department, specialty, and national chain stores. History from Wikipedia, Encyberpedia and OldCompany.com (old stock certificate research service) About Specimen Certificates Specimen Certificates are actual certificates that have never been issued. They were usually kept by the printers in their permanent archives as their only example of a particular certificate. Sometimes you will see a hand stamp on the certificate that says "Do not remove from file". Specimens were also used to show prospective clients different types of certificate designs that were available. Specimen certificates are usually much scarcer than issued certificates. In fact, many times they are the only way to get a certificate for a particular company because the issued certificates were redeemed and destroyed. In a few instances, Specimen certificates were made for a company but were never used because a different design was chosen by the company. These certificates are normally stamped "Specimen" or they have small holes spelling the word specimen. Most of the time they don't have a serial number, or they have a serial number of 00000.