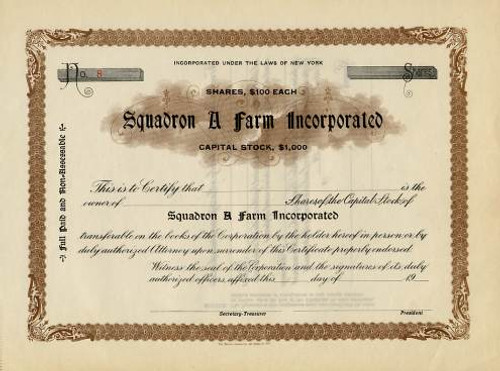 Beautifully engraved unissued certificate from Squadron A Farm Incorporated. This historic document was printed by the Broun-Green Company and has an ornate border around it. The Squadron A Farm was named after the summer of 1915, when Squadron A encamped on 140-plus acres that had belonged to successful businessman Florent Verdin that year. The mounted unit had a colorful history. In 1898, the squadron supplied a troop of cavalry in the Spanish American War. Squadron A was again called into federal service in 1917, and they became the 105th Machine Gun Battalion before going to France and Belgium to fight in World War I. Their motto was "Boutez en Avant," or "Push Forward."