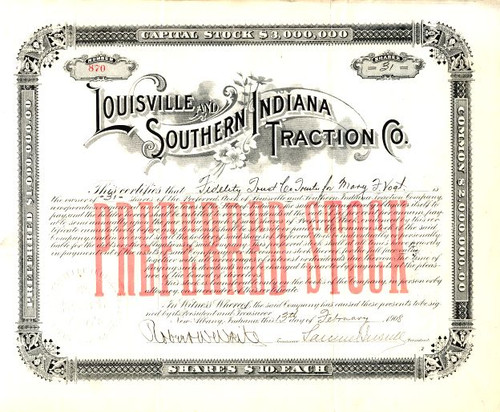 Beautiful certificate from the Louisville and Southern Indiana Traction issued in 1908. This historic document has an ornate border around it with a vignette of an eagle. This item has been hand signed by the Company's President, and Secretary, and is over 103 years old. Samuel Insull Born in London, Samuel Insull traveled to the United States to head Thomas Edison's Construction Co. By 1892, he was president of the Chicago Edison Company and amassed a utilities empire across 30 states under the two major holding companies of Insull Utility Investments Inc. and Corporation Securities Company of Chicago. When the stock market crashed in 1929, Insull had to turn over Utility Investments Inc. to his creditors. Resigning from 60 corporations and facing an indictment, Insull left the country. Although he was acquitted of embezzlement, fraud, and violation of the Bankruptcy Act, Insull became an example of the corruption and fraud which contributed to the Great Depression. The revelation of corporate duplicity brought to light during the Insull investigations led to a public outcry for reform. Samuel Insull began construction of the Louisville and Southern Indiana Traction Company line to Indianapolis from Louisville in 1903. Insull's Louisville and Northern Railway Lighting Company controlled the line starting in 1905. Insull acquired the Indianapolis, Columbus and Southern Traction Company in 1912 and organized the Interstate Public Service Company that same year. The Interstate Public Service Company also operated street railways in Jefferson, New Albany, and Columbus, Indiana. The company was reorganized in 1931 as the Public Service Company of Indiana and was operated by the Indiana Railroad. Stock research by OldCompany.com (old stock certificate research service).