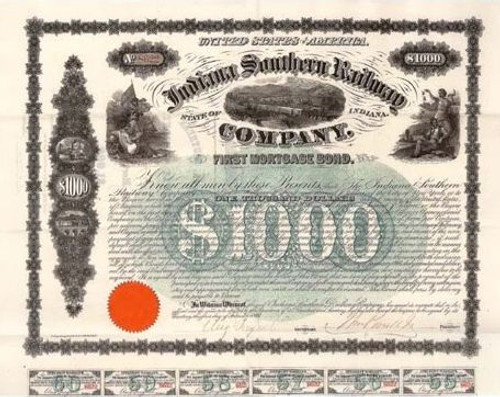 Beautifully engraved certificate from the Indiana Southern Railway Company issued in 1866. This historic document has an ornate border around it with vignettes of a train passing over a bridge, a man and women, sailor holding a flag and an old steamboat. There are over 59 unused coupons attached to this certificate on the bottom. This item is hand signed by the company's president and secretary and is over 146 years old. It is also signed by Samuel Jones Tilden as one of the bond trustee's on the verso. In 1876 Tilden was elected President of the United States and won over Rutherford B. Hayes by 254,000 popular votes but.....sound familiar? Both Rutherford B. Hayes, the Republican candidate, and Samuel L. Tilden, the Democratic candidate, were moderate reformers, and the election was very close. Tilden led in the popular vote, but the count from four states, which represented a total of 20 votes in the electoral college, was disputed. No precedent had yet been set for dealing with contested votes, and tenacious partisanship during Reconstruction intensified the matter. Congress eventually, in January 1877, set up a special electoral commission with an equal number of Democrats and Republicans to decide the disputed votes. The tiebreaker member swayed to the Republican side, and the commission awarded all disputed votes to Hayes, who won the election with 185 electoral votes to Tilden's 184. A Compromise came about as Democrats in the Senate threatened to prevent the commission from reporting with a filibuster. Republicans negotiated with the Democrats to abandon the filibuster by offering the following: the withdrawal of federal troops from the South, appointment of at least one Southerner to Hayes's cabinet, and economic benefits to industrialize the South. Unfortunately, withdrawal of troops meant the Republicans essentially abandoning the enforcement of racial equality in the South. 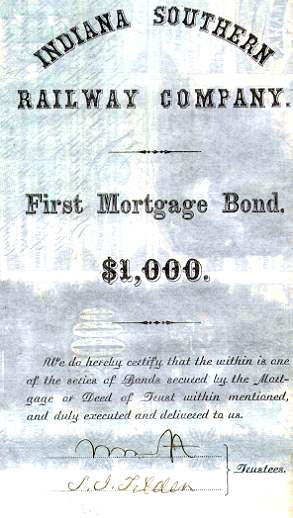 Samuel Jones Tilden's Signature as Trustee
Samuel Jones Tilden, (1814-1886), American political leader, who as the DEMOCRATIC presidential candidate in 1876 lost the most controversial ELECTION in American history. That loss climaxed a long career in which his reform impulses were frequently overridden by his personal ambition and his ambitions often frustrated by his indecisiveness. Tilden was born in New Lebanon, N. Y., on Feb. 9, 1814. Precocious but sickly, he was sporadically schooled and tutored. In 1838 he entered law school at New York University, and in 1841 he was admitted to the bar. He became an outstanding corporation lawyer, who mastered the complexities of reorganizing and refinancing railroads. He amassed a fortune in fees, which he augmented by shrewd investments in railroads, iron mines, and real estate. Early Political Career An ardent Jacksonian in the 1830's, Tilden became a leader in the 1840's of the Barnburners, a Democratic faction committed to free-soil principles. Although a delegate to the Free-Soil National Convention in 1848, he did not follow most Free-Soilers into the new REPUBLICAN PARTY. Growing wealthy and conservative, he returned to the Democratic party and abandoned his free soil convictions. During the Civil War, Tilden's main concerns were neither union nor slavery but the threat of tyranny by a powerful centralized government in Washington. After the war he condemned Radical Reconstruction and in 1868 managed the presidential campaign of Horatio Seymour, governor of New York. From 1866 to 1874, as chairman of the New York State Democratic Committee, Tilden initially cooperated with and later helped destroy the infamous "Tweed ring" that controlled New York City politics. Even after the Republican New York Times attacked the ring with damning evidence in July 1871, Tilden, a partisan Democrat, moved cautiously, but in October he examined ring bank accounts and proved that William M. Tweed and his friends had stolen from the city. Members of the ring were promptly arrested. As a member of the state legislature in 1872, Tilden worked to smash the Tweed ring and reform the judiciary, but he characteristically opposed a reform charter for New York City. Governor and Presidential Candidate Renowned as a reformer, Tilden was nominated and elected governor of New York in 1874. A meticulous administrator, he reduced expenditures and taxes by introducing economics and eliminating frauds. He destroyed the bipartisan "Canal ring," a group of wealthy politicians who had stolen from the funds necessary to repair and extend the state canal system. His excellent gubernatorial record secured him the 1876 Democratic presidential nomination, with Gov. Thomas A. Hendricks of Indiana as his running mate. The Republicans chose Rutherford B. HAYES of Ohio. In the bitter campaign that followed, the Democrats attacked Republican corruption in President GRANT's administration, while the Republicans accused the Democrats of being disloyal during the war and made issues of Tilden's connections with railroads, his questionable income tax returns, and his health. His slight build, boyish face, weak voice, nervous and awkward actions, and secretive and aloof nature did not inspire voters, but his intellect and reform reputation did. Tilden apparently won the election, but Republican audacity and ELECTORAL vote bargaining coupled with Tilden's timidity and procrastination gave the presidency to Hayes. In 1880 and 1884 there was sentiment for Tilden's renomination, but he refused both times to be considered. He died in Yonkers, N. Y., on Aug. 4, 1886, a bachelor. Of his $5-million estate, $3 million helped found the New York Public Library.