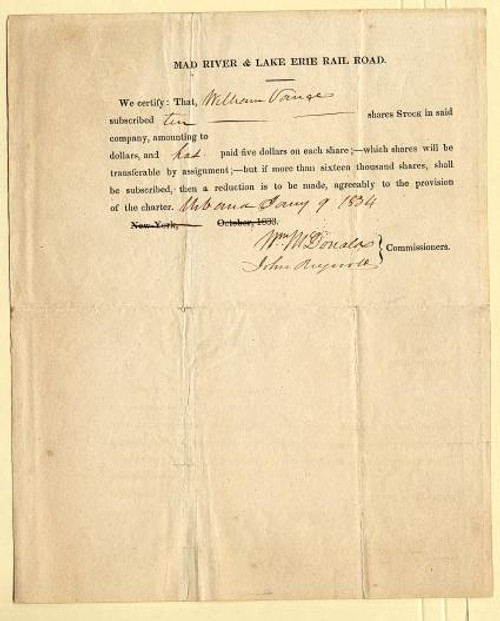 Stock subscription receipt from the Mad River & Lake Erie Rail Road. This historic document provides signatures of the Commissioners from the Rail Road Company. This item is over 176 years old.

Commissioner's Signatures
The Mad River and Lake Erie Railroad was the second railroad to be built and operated in the U.S. state of Ohio (the Erie and Kalamazoo Railroad was first, beginning operations in Toledo during the Toledo War in 1836). It was also the first railroad company chartered west of the Allegheny Mountains. The railroad first broke ground in Sandusky, for construction on September 17, 1835 at the site which is currently Battery Park Marina. On December 2, 1837, the MR&LE took delivery of its first steam locomotive, Sandusky, built by Rogers, Ketchum and Grosvenor of Paterson, New Jersey. Sandusky was also the first locomotive built by Rogers and the first to include features such as cast iron driving wheels and counterweights. The locomotive's transportation from New Jersey was overseen by Thomas Hogg, the railroad's chief mechanical engineer. The MR&LE used a rail gauge of 4 ft 10 in (1,473 mm), a gauge that soon became known as "Ohio gauge". Construction continued on the MR&LE, reaching Tiffin by 1841 and Kenton in 1846. The railroad was completed to Springfield in 1849. Over the next several decades, the Mad River and Lake Erie Railroad changed ownership at least four times. In 1892, it came under the control of the Big Four Railroad (Cleveland, Cincinnati, Chicago, and St. Louis Railroad), which itself became part of the New York Central Railroad. Most of the original MR&LE lines were abandoned by Penn Central at the advent of Conrail in 1976, if not earlier. However, a portion between Bellefontaine and Springfield continues in operation by RailAmerica's Indiana and Ohio Central Railroad. Most of the MR&LE lines that once ran through Downtown Sandusky have been removed, but structures created for the railroad can still be seen today. The break wall directly southeast of the Battery Park Marina and the Sandusky Police Station is one of these structures. It once supported tracks, although the bridge connecting the end of the break wall to the main land has been removed to allow larger boats to pass through to several apartments with boat garages. In addition, tracks serving the Norfolk Southern coal docks located west of downtown still use a small portion of the original MR&LE right-of-way. History from Wikipedia and OldCompany.com (old stock certificate research service).