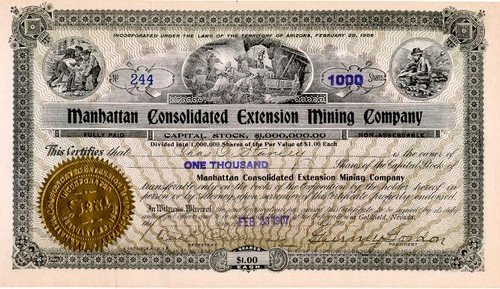 Beautiful certificate from the Manhattan Consolidated Extension Mining Company issued in 1907. This historic document has an ornate border around it with a vignettes of mining scenes. This item has the signatures of the Company's President, Gurney Gordon and Secretary, R L Colburn. 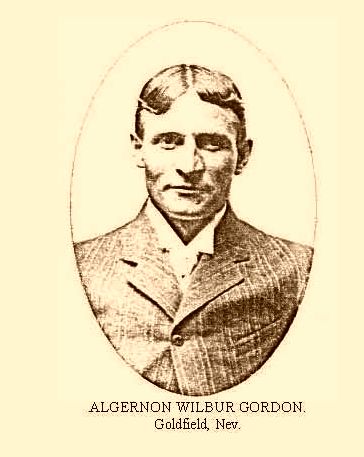 President of the Manhattan Consolidated Extension Mining Company of Goldfield It is a fact that mining is the greatest of all creative industries, and it may truly be added that to it is directly due the nation's present prosperity. It was indeed the immense treasure-houses of California gold and Nevada which enabled this nation to triumph in the sixties in the longest, bloodiest war of modern times, and rendered possible quick recuperation from the exhaustive struggle. It was the mines of California that caused the speedy settlement of one of the most productive States Of the Union, and the same cause is responsible for transforming the vast plains and desolate hills of Nevada into hives of industry. Among the early pioneers of this great transformation, and one who brought with him skill and experience developed in other mining districts, is the subject of this sketch ; and for his good work in this respect he has realized, deservedly prosperous results, and we take great pleasure in giving him due honor with other sturdy pioneers, whose biographical sketches appear in the current number of SUCCESSFUL AMERICAN. Of Scotch-English descent, the subject of this sketch, familiarly known as Gurney Gordon, (and, as a matter of fact, in all business transactions he so signs his name), was born at Warren, Ohio, on November 24, 1874. He is a son of Zachariah and Ann Maria Gordon, his father being a noted farmer of the Buckeye State. He is a nephew, on his mother s side, of J. E. Pickering, for many years a leading judge of the District Court of Ohio. Mr. Gordon received a liberal education in public schools and other institutions of learning in Nebraska, obtaining thereat a technical knowledge of mining which when the opportunity come to put it to a practical test resulted in great advantage to him in after life. His first venture in mining and prospecting was in Montana, where he made a business of examining mines, reporting on them, and operating them. His stay in Montana was productive of very satisfactory results. He acquired a one-half interest in what is known as the Top Hand Group of Mines, his brother owning the other half, and he also owns a one-third interest in the Tenderfoot Mine. Both of these properties are near Pony, about sixty miles from Butte, and have been rich producers of ore. In Goldfield, Nev., Mr. Gordon is interested in the Rep Top Mine, in the development of which he had as co-operators W. E. Hughey, C. D. Taylor, R. L. Colburn, and H. L. Taylor, and he is President of the Manhattan Consolidated Extension Mining Company ; President also of the Round Mountain Red Top Mining Company, and Vice-President and General Manager of the Fairview Gordon Boulder Mining Company, of Fairview, some of the samples of which run nearly two-thirds pure gold. Fairview, in Churchill County, is indeed the location of some of the richest strikes in the history of Nevada. Mr. Gordon is a gentleman of great generosity of nature. He belongs to that class of men who receive friends with a quiet cordiality which is thoroughly sincere in every respect, and which means no more and no less than is outwardly exhibited. Such are the qualities of a true gentleman. Mr. Gordon is an old member of the Independent Order of Odd Fellows, and is a charter member of the Montezuma Club of Goldfield, the leading club of that now far-famed mining district. RICHARD LINCOLN COLBURN 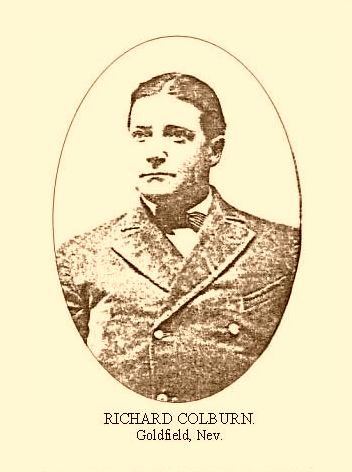