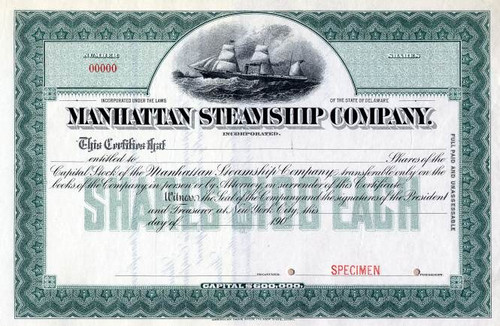 Beautifully engraved specimen certificate from the Manhattan Steamship Company printed in 1900. This historic document was printed by the American Banknote Company and has an ornate border around it with a vignette of sailing ship at sea. This item is over 110 years old.

Certificate Vignette
The Manual of statistics - 1902 MANHATTAN STEAMSHIP CO. A corporation formed under the laws of Delaware in January, 1901. The object of the company was the establishment of lines of steamers to run between New York and Portland ; New York, Rockland, Me., and Bangor, Me.; New York, Eastport, Me., and St. John, N. B.; also between New York, Yarmouth and Halifax, N. S. The company has a fleet of six steamships operating on its lines. The preferred participating stock is 7 per cent., non-cumulative. After 5 per cent, shall have been paid on the common out of the surplus earnings of any year, the preferred and common share equally in any further division of profits. The company has no funded debt. President and General Manager, N. L. Newcomb, New York ; Vice-President and Treasurer, George E. Green, Binghamton, N. Y.; Secretary and Assistant Treasurer, Ernst Smith, New York. Directors, N. L. Newcomb, Hon. George E. Green, Hon. Charles V. Fornes, Ernst Smith, William McKenzie, Richard Morrell, E. R. Bellman, Charles DeHart Brower, Henry McLaughlin, William Pugsley, Walter J. Dunham, Charles S. Hinchman, F. M. Black, William F. Kimber, G. G. Jackson, F. H. Newcomb, Joseph H. Wright. Main office, 11 Broadway, New York. Annual meeting, first Wednesday in February. History from OldCompany.com (old stock certificate research service). About Specimen Certificates Specimen Certificates are actual certificates that have never been issued. They were usually kept by the printers in their permanent archives as their only example of a particular certificate. Sometimes you will see a hand stamp on the certificate that says "Do not remove from file". Specimens were also used to show prospective clients different types of certificate designs that were available. Specimen certificates are usually much scarcer than issued certificates. In fact, many times they are the only way to get a certificate for a particular company because the issued certificates were redeemed and destroyed. In a few instances, Specimen certificates were made for a company but were never used because a different design was chosen by the company. These certificates are normally stamped "Specimen" or they have small holes spelling the word specimen. Most of the time they don't have a serial number, or they have a serial number of 00000. This is an exciting sector of the hobby that has grown in popularity over the past several years.