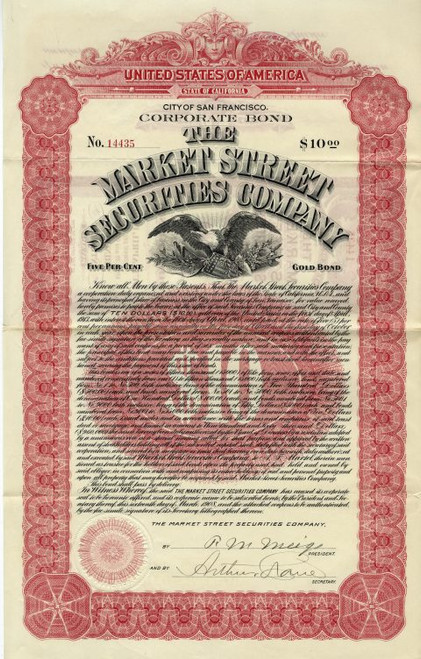 Beautiful uncancelled Gold Bond certificate from the Market Street Securities Company. issued in 1908. This historic document has an ornate border around it with a vignette of an eagle. This item has the signatures of the Company's President, F. M. Meigs, and Secretary, Arthur Crane. 10 coupons attached on right. 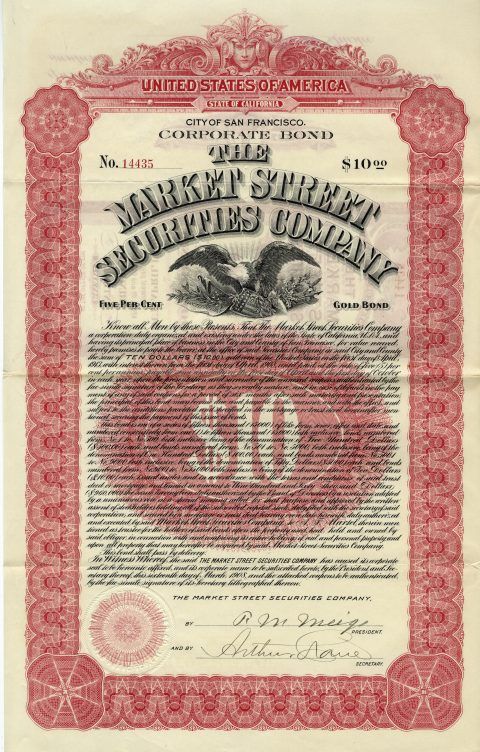 Certificate
On June 25, 1908, the Market Street Bank of San Francisco, a corporation, was adjudged insolvent, and Louis H. Mooser was appointed receiver thereof to liquidate its affairs. Shortly thereafter certain persons interested in various ways with the bank conceived a plan of rehabilitating that institution, and for the purpose of carrying out that plan organized a corporation under the name of the Market Street Securities Company. That corporation issued to the creditors and depositors of the Market Street Bank bonds in exchange for claims and accounts against the bank, the ultimate purpose being to buy in, if possible, all of the bank's outstanding obligations. Subsequently the securities company passed a resolution and gave public notice to the effect that if the proposed rehabilitation of the insolvent bank was not successful, it would return the claims, consisting of bank books and other evidences of indebtedness, to the parties who had assigned them to the securities company, upon the return of the bonds issued therefor, subject to the condition that the bonds returned must be the identical bonds issued to the depositor or creditor in exchange for the assignment of his claim. History from Wikipedia and OldCompany.com (old stock certificate research service)