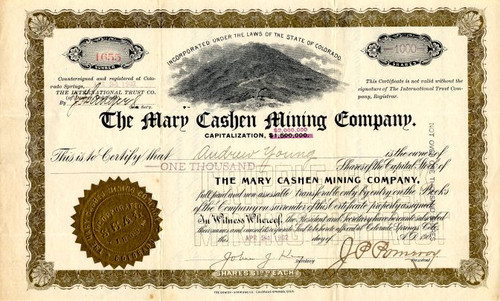 Beautiful certificate from the Mary Cashen Mining Company issued in 1902. This historic document was printed by the Gowdy-Simmons Company and has an ornate border around it with a vignette of an a mountain and a mining facility at its base. This item has been hand signed by the Company's President, J. P. Pomeroy and Secretary, John J. Key and is over 109 years old. Issued to Andrew Young.

Certificate Vignette
The official manual of the Cripple Creek district, Colorado, U. S. A., Volume 1 - 1910 The Mary Cashen Mining Company. Incorporated November, 1899. J. P. Pomeroy, president; B. P. Waggener, vice-president; Clarence Directors Edsall, secretary and treasurer: J. P. Sweeney, second vice-president; W. T. Bland, B. N. Beal. Main Office--Hagerman building, Colorado Springs, Colorado. 1,500,000 shares. Par value, $1.00. In treasury January 1, 1900, Capitalization 150,000 shares; in treasury January 1, 1900, $7,000.00 cash. Owns the mineral rights to all that portion of the Spicer claim north Property of Victor avenue, containing about 3 acres, and a portion of the northeast part of the Mt. Rosa placer, including the Spicer Extension claim, in the town of Victor, in section 29, containing about 7 acres. The company also owns the surface of lots Nos. 5, 6, 7, 8, 9 and a portion of No. 4 of block 7, in said town of Victor. This property had formerly been worked under bond and lease for Development $ 100,000 from the Mt. Rosa M. & M. Co., for two years, when it was purchased by this company. The former lessees had been cross-cutting to the west, but failed to find pay ore; in cross-cutting to the east, however, this company has opened up a large fissure vein, varying from 8 to 12 feet wide, and containing several ore chutes. This has been opened up at the 350-foot and 425-foot levels. Besides three ore houses, the company has a commodious building, containing a 30-horse power electric hoist and compressor and five air drills, the air being supplied by the La Bella Mill, Water and Power Company. The mine is now producing and is expected to pay dividends in a very short time. As the company was only incorporated in November, 1899, the price of stock during 1899 can not be given. At the time of the incorporation the price of stock was 20 cents per share, and on February 23, 1900, was 39 1-2 cents. Stock research by OldCompany.com (old stock certificate research service).