Historic check from Merchants National Bank signed by famed whaler, Andrew Hicks This historic has a border around it with a vignette of old Whaling Ship. This item is over 147 years old. 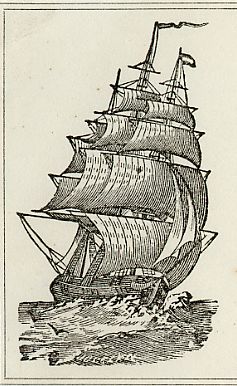 Check Vignette
Andrew Hicks Biography: Andrew Hicks Birth: 17 JUN 1799 in Westport, MA 1 2 Death: 4 FEB 1895 in Westport Point, MA 1 Burial: Hicks Cemetery, Barney Hicks Homestead, 1603 Main St., Westport, Bristol Co., MA Note: From "Rep. Men and Old Families of SE Mass", p 771: "Andrew Hicks, eldest son, of Barney and Sarah (Cook) Hicks, was born in Westport, MA June 17 1799, and resided on the home farm until he was 13 years of age, when he went to Adamsville, RI. There he was engaged as a clerk in a store, where he remained for 8 years, until he opend a store of his own, which he counducted for 3 years. Returning then to the home farm he several years later, in 1836, fitted out a vessel and began an extended whaling busines, which he continued with marked sucess for more than half a century. At one time he owned interests in 11 vessels (Including the Andrew Hicks and Mermaid) and during his career built 8 or more vessels. He owned Hicks' block in New Bedford. Mr. Hicks in former days was a Whig and after the formation of the Republican Party was active in support of its principles. He represented Westport in the Legislature of 1866, and for a third of a century, and perhaps more, he was a justice of the peace. He was for 41 years before his death a director of the Merchants' National Bank of New Bedford. Mr. Hicks was a very careful and sound financier and was very sucessful. He was modest in his bearing and upright in all his dealings, and so lived as to command the respect of all. He never married. He died at Westport Point, Feb 4,1895 in the 96th year of his age." Hicks while quite a financier of ships, and built the ship, Andrew Hicks known to be the last American Whale ship in operation, 1880-1891. The Andrew Hicks, was sold to become a merchant ship in 1917.