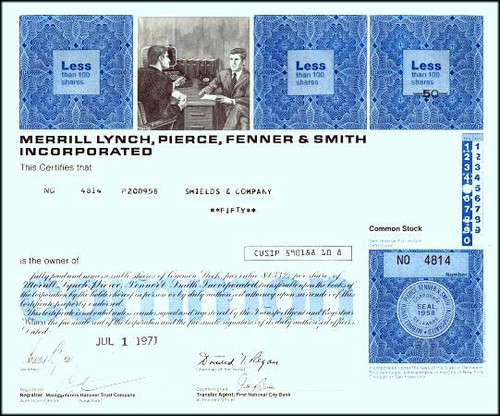 Beautifully engraved Certificate from the Merrill Lynch, Pierce, Fenner & Smith Incorporated issued no later than 1973. This historic document was has an ornate block border with a vignette of a stock broker talking to his client (in person) with an old dial telephone and quotron terminal in the background. This item has the printed signatures of the company's officers, including Donald Regan as Chairman of the Board, and is over 44 years old. 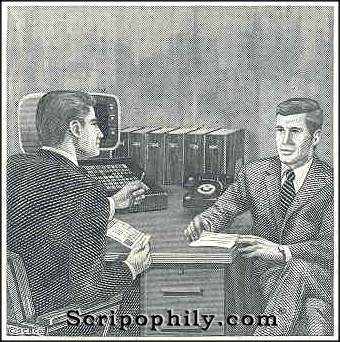 Certificate Vignette
Merrill Lynch & Co., Inc. which, prior to 2009, was publicly owned and traded on the New York Stock Exchange under the ticker symbol MER. Merrill Lynch & Co. agreed to be acquired by Bank of America on September 14, 2008, at the height of the 2008 Financial Crisis. The acquisition was completed in January 2009 and Merrill Lynch & Co., Inc. was merged into Bank of America Corporation in October 2013, although certain Bank of America subsidiaries continue to carry the Merrill Lynch name, including the broker-dealer Merrill Lynch, Pierce, Fenner & Smith. The company was founded on January 6, 1914, when Charles E. Merrill opened his Charles E. Merrill & Co. for business at 7 Wall Street in New York City. A few months later, Merrill's friend, Edmund C. Lynch, joined him, and in 1915 the name was officially changed to Merrill, Lynch & Co. At that time, the firm's name included a comma between Merrill and Lynch. In 1916, Winthrop H. Smith joined the firm. Donald Thomas "Don" Regan (December 21, 1918 June 10, 2003) was the 66th United States Secretary of the Treasury from 1981 to 1985 and the White House Chief of Staff from 1985 to 1987 in the Ronald Reagan Administration. He advocated "Reaganomics" and tax cuts to create jobs and stimulate production. Before serving in the Reagan administration, Regan served as chairman and CEO of Merrill Lynch from 1971 to 1980. He had worked at Merrill Lynch since 1946, and before this he had studied at Harvard University and served in the United States Marine Corps, achieving the rank of lieutenant colonel. History from Wikipedia and OldCompany.com (old stock certificate research service)