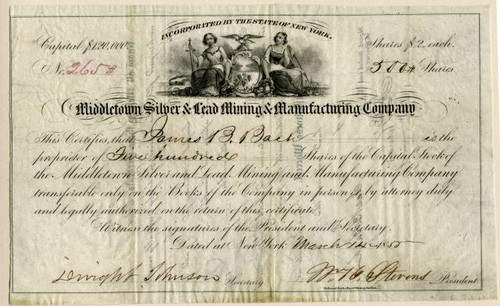 Beautiful uncancelled early mining stock certificate from the Middletown Silver & Lead Mining & Manufacturing Company issued in 1854. The company was incorporated in the State of New York. This historic document and has a border around it with a vignette of two women on both sides of the New York state shield with a train in the background. This item is hand signed by the Company's President (W. H. Stevens) and Secretary (Dwight Johnson) and is over 158 years old. The certificate was issued to and signed on the verso by James Bach. Fine condition. 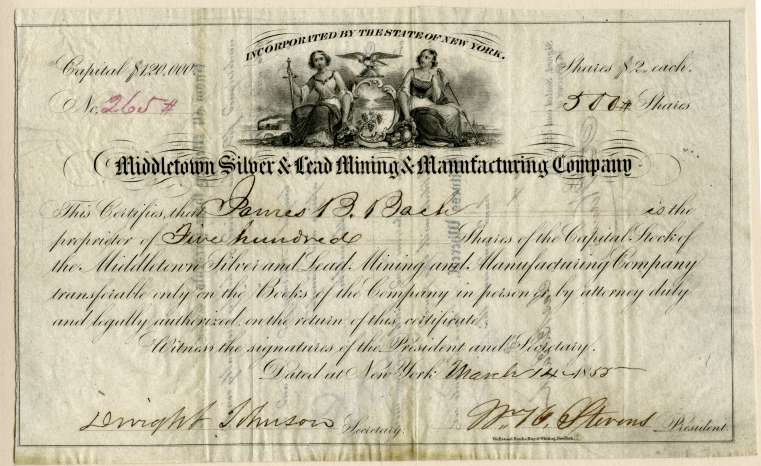 Certificate
The Metallic Wealth of the United States - 1854 Middletown Silver and Lead Mining and Manufacturing Company. This mine is thus noticed by the State Geologist in his Report.* "It (galena) here occurs in a thin bed or seam of quartz included in mica-slate, having a thickness of from 10 to 20 inches. The strata dip west between 35° and 140°. The ore is associated with blende, iron pyrites, and, rarely, with yellow copper pyrites. These ores, however, form but a small proportion of the seam, into the composition of which a plumbaginous argillite, or mica-slate, often enters. The galena seems even less abundant than some of the other sulphurets. The excavations prove that the mines must have been wrought formerly to a considerable extent." History from Encyberpedia and OldCompany.com (old stock certificate research service)