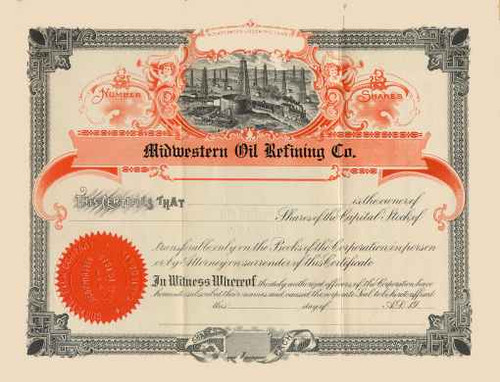 Beautifully engraved unissued Movie Prop certificate from the Midwestern Oil Refining Company dated 19XX. This historic document has an ornate border around it with a vignette of oil field. This item is over 85 years old. This certificate is embossed with the corporate seal from Christie Film Company dated 1917 - Incorporatd in California. This item was acquired with a group of material from the Ellis Mercantile Company. If you have ever been involved in Movie or TV Production in Los Angeles, it is almost certain you've had dealings with Ellis Props and Graphics Partners, or Ellis Mercantile as most old-timers call it. Ellis Mercantile was established as a pawn shop in 1908. When a customer needing a glass eye for one of the earliest movie productions suggested that he rent the glass eye instead of purchasing it, the rental business was started. Over the years, Ellis props have been used on countless famous movies and well-known TV productions. Ben-Hur, Cleopatra, Spartacus, The Titanic, Get Smart and Wild Wild West to name but a few. Ellis, owned by the Tapestry Group, closed shop in 1999, due to failing profits combined with runaway production concerns. Over five days in early June 2000, nearly a century worth of movie props were auctioned off at the Universal Hilton and via the Internet. Everything from Ellis' 40,000 square feet of props went on the block. Attendees could bid on antiques and collectibles such as an operating Gatling gun from circa 1872, used in Clint Eastwood's The Outlaw Josey Wales, life preservers from The Titanic, the baby carriage from De Palma's The Untouchables, light sabers from Star Wars, the umbrella phone from Get Smart, as well as movie used real prop money which we acquired. Al E. Christie is another pioneer producer. Away back in October, 1911, he was sent by David Horsley to Los Angeles with three companies of players which at that time included Dorothy Davenport, Harold Lockwood, Victoria Forde Eugenie Forde, Russell Bassett, Horace Davey, Gordon Sackville, Leo Maloney, and Directors Thomas Ricketts and Milton Fahrney. In addition to directing the comedy company Mr. Christie acted as general manager of the plant, which they located at the corner of Sunset Boulevard and Gower street. This corner is still practically the pivotal center of the industry in Hollywood. The first pictures were made without diffusers in the shadow of a barn then on the premises, while an old roadhouse on the corner housed the actors, offices, laboratory and all equipment. Where one of the new stages recently added by Mr. Christie now stands was the corral where upward of fifty horses were often kept for Western pictures, one of which was turned out each week in addition to the comedy produced by Mr. Christie and a modern drama. The Nestor brand covered all three types of pictures at that time. When the Nestor became part of the newly-formed Universal (in June, 1912) Al E. Christie was given charge of the comedy companies. At the time of the merger Universal also leased and built on the opposite corner (where L-Ko now stands). Mr. Christie worked for some time on that lot, and this was the scene of his activities until March, 1915, when Universal City was opened, at which time a special stage was constructed for his comedy companies in that big plant. He remained there until January, 1916, when with his brother, Charles H. Christie, he formed the Christie Film Company and leased, from Quality Pictures Corporation, the original lot which had seen his early successful endeavors. The first six months the newly formed company made comedies on contract for Universal, and these were distributed under the old Nestor brand. In May, 1916, Fred L. Porter, a man of experience in the film business, was added as secretary of the company. In July the same year Mr. Christie entered the open market with a weekly comedy release to independent exchanges. The studio, lands, buildings, etc., were purchased outright in October last year and the stage capacity has been nearly doubled since that time, as well as an up-to-date laboratory being installed.