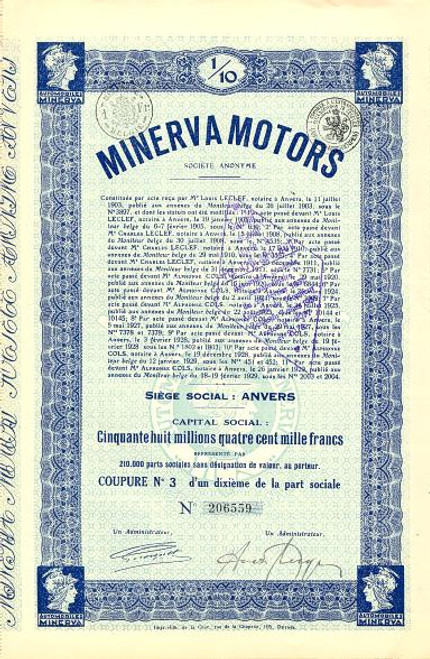 Beautifully engraved certificate from Minerva Motors issued in 1929. This historic document has an ornate border around it with a vignettes of an allegorical woman. This item is hand signed by the company's officers and is over 76 years old. There are 30 unused coupons attached on the right side. Company History 1897 Founding of the company S. de Jong & Co located in Antwerp, producing Minerva bicycles. 1898 New factory opened in Berchem 1899 Besides bicycles also Minerva motorcycles were taken into production 1900 Due to the succes of the motorcycles, again the company has to grow till a working area of 3000 m2 1902 A new small car, called the Minervette was develloped and taken into production 1903 S. de Jong & Co. is renamed into 'Naamlooze Vennootschap Minerva Motors' 1904 again a new factory was opened, Minerva is now 700 employees big 1906 new factory buildings, total size 15000 m2, 900 employees 1907 4 Minerva cars entered the rally 'circuit d'Ardennes' and finishad all 4 on first, second, third and sixst place. A unique happening 1908 Introduction of the engine without valves (knight pattent) 1909 Due to the succes of the valve-less engine, the decision was made to stop producing cars with normal 4-stroke engines 1910 10.000 m2 added to existing facility, total 1250 employees 1911 1600 employees, severall rally victories 1912 new factory 40.000 m2, 3000 employees 1914 at the start of worldwar I, the factory is being used for producing war-material 1919 after ww I and a short reorganisation the production of cars is re-started 1920 new factory for producing carroseries is being built 1922 25th birthday, carrosery factory opened in Mortsel 1923 Mortsel plant is too small to be able to reach the production need 1924 New production site opened in Anderlecht near Brusselles 1925 Take over of N.V. Auto-traction, trucks and tractors are now also produced under the Minerva flag 1930 introduction of eight cylinder 6616 cc AL model 1936 Due to sliding of sales Minerva merged with other car manufacturer called Imperia 1951 Minerva approached the Rover company to be able to build Land Rover based lightweight four wheel driven cars for the Belgium army (approx. 2500 cars were built) 1954 Minerva-Rover deal ended when Minerva sued rover for breach of contract 1955 new all-terrain car was introduced in military and civilian, but due to financial problems only a few were built. These cars were believed to be indestructable. 1958 Minerva went bankrupt