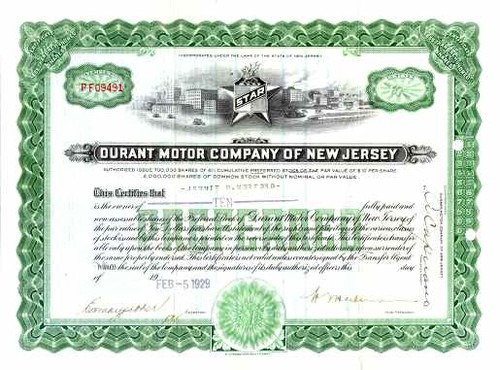 Beautifully engraved certificate from the Durant Motor Company of New Jersey issued no later than 1929. This historic document was printed by the E.A. Wright Banknote Company and has an ornate border around it with a vignette of factory buildings and the Star logo. This item is hand signed by the company's vice-president and assistant secretary and is over 72 years old. The Company was founded by William C. Durant, (1861-1947): The founder of General Motors Corporation. Durant began his career with a horse-drawn carriage company in 1886 and took over Buick in 1904, forming the General Motors (GM) Company in 1908. He lost control in 1910 to Chevrolet but regained ownership in 1915. He was forced out for good in 1920 and founded his own company, Durant Motors, Inc., in 1921.