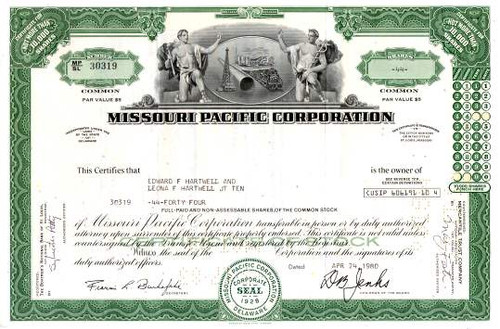 Beautifully engraved certificate from the Missouri Pacific Corporation issued prior to 1983. This historic document was printed by the American Banknote Company and has an ornate border around it with vignettes of two allegorical and a train, factory building, and oil tower. This item has the printed signatures of the company's chairman ( Downing B. Jenks ) and secretary and is over 31 years old.

Certificate Vignette
The Missouri Pacific Railroad (reporting mark MP), also known as the MoPac, was one of the first railroads in the United States west of the Mississippi River. MoPac was a Class I railroad growing from dozens of predecessors and mergers, including the St. Louis, Iron Mountain and Southern Railway (SLIMS), Texas and Pacific Railway (TP), Chicago and Eastern Illinois Railroad (C&EI), St. Louis, Brownsville and Mexico Railway (SLBM), Kansas, Oklahoma and Gulf Railway (KO&G), Midland Valley Railroad (MV), San Antonio, Uvalde and Gulf Railroad (SAU&G), Gulf Coast Lines (GC), International-Great Northern Railroad (IGN), New Orleans, Texas and Mexico Railway (NOTM), Missouri-Illinois Railroad (MI), as well as the small Central Branch Railway (an early predecessor of MP in Kansas and south central Nebraska), and joint ventures such as the Alton and Southern Railroad (AS). At year-end 1967 operated mileage was 9041 miles of road and 13318 miles of track, not including DK&S, NO&LC, T&P and its subsidiaries, C&EI or Missouri-Illinois. On January 8, 1980, the Missouri Pacific Railroad was purchased by the Union Pacific Railroad. Because of lawsuits filed by various competing railroads, the merger was not approved until September 13, 1982. After the Supreme Court denied a trial from the Southern Pacific, the merger took effect on December 22, 1982, at 2:55 p.m. However, due to outstanding bonds of the Missouri Pacific, the merger with Union Pacific did not become official until January 1, 1997. The Mississippi River Corporation began buying Mo-Pac stock in 1959 and gained voting control in 1962. Mississippi Board Chairman William G. Marbury's candidate to succeed Russell L. Dearmont as president of Mo-Pac was Downing B. Jenks. Mr. Jenks was elected president, and Mr. Dearmont was elected chairman of the board, in 1961. Mr. Jenks came to the Mo-Pac from the Rock Island Lines where his election as president in 1956 at age 40 made him the youngest president in modern railroad industry. Beginning in 1961, Mr. Jenks initiated an intensified plant and equipment modernization program that continues today. He also immediately began building a new management team. An important factor in developing the new team was the lowering of Mo-Pac's retirement age from 70 to 65 which made it possible both. to promote people already with the railroad and to make room for personnel brought in from outside. One Mr. Jenks brought in 1961 was John H. Lloyd. Mr. Lloyd joined Mo-Pac as vice president-operation, the same post he had held with the Rock Island Lines. In 1971, Mr. Jenks was elected Mo-Pac chairman and the same year was elected president and chief executive officer of Mississippi River Corp. following the death of Mr. Marbury. Mr. Jenks was elected chairman of the board of Mississippi in 1973. Mr. Lloyd succeeded Mr. Jenks as president of the Missouri Pacific in 1972 and was elected chief executive officer of Mo-Pac in 1974. During Mr. Jenks' presidency. Mo-Pac made major strides in improving the efficiency of its operations through mergers and acquisitions. In 1964, Mo-Pac's Texas and Pacific Railway subsidiary assumed control through stock purchase of three railroads making up the 767-mile Muskogee Co. system which operated in Oklahoma, Kansas, Arkansas and Texas.