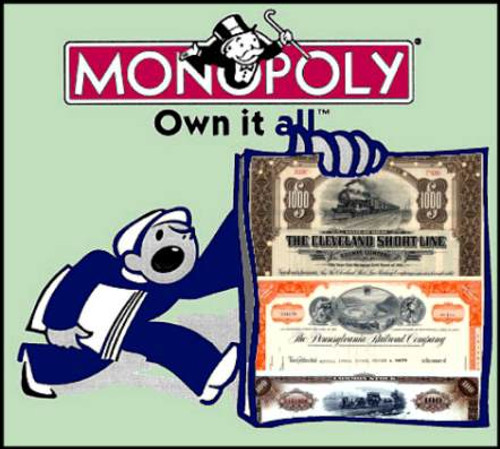 4 Certificate Package
Monopoly was originally derived from a precursor known as "The Landlord's Game," designed in 1904. The Landlord's game became a fad on northeastern college campuses and gradually evolved into its current form until it reached the hands of Charles Darrow. Darrow, immediately smitten with the idea of the game, handmade his own board out of wood and oilcloth, and soon was making sets for all his friends. Darrow formalized the rules and names of the Monopoly game, and attempted to sell it to Parker Brothers in 1934. His idea was initially rejected, until the company's president bought a set himself and fell in love with it. Within a year, Parker Brothers had bought the game. Today, Monopoly is produced in 19 languages, including a CD-ROM version, a Star Wars version, a milk chocolate version, and a $400 version with silver houses and gold playing pieces. But of course, you can still pick up the basic set for $10 at your local Toys 'R' Us. All in all, over 100,000,000 Monopoly games have been sold worldwide. Just about every American knows how to play Monopoly, but I'll run through the game anyway. Players, each give $1500 in Monopoly Money, take turns rolling dice to see how far the move around a 40-space board, and take action depending on what space they land on. Some spaces instruct players to draw a "Community Chest" or "Chance Card" but most of the spaces on the board are Properties. If a player lands on a property, he may buy it for the price listed on the space. Property values range from $60 to $400 (for the prestigious Boardwalk space), and most properties are assigned to one of eight "color groups" indicated by the color of the space. (The only exceptions are the four railroads and two utilities.) When a player lands on a property owned by another player, her must pay that player an amount listed on that property's deed. Each player's goal is to collect a "monopoly" of one or more color groups, which means owning all two or three properties in that group. Owning a monopoly increases the rent others must pay on each property, and allows to owner to build houses on each space in that color group. Owners can buy up to five houses on each property (with the fifth house being called a hotel); each house increases the rent on the property. Rents get higher as you move along the board, ranging from $2 for landing on an undeveloped Mediterranean Ave., to $2000 for landing on Boardwalk with a hotel. Railroad and utilities can not be built up; rent on those depends on how many Railroads or Utilities a player owns. If a player cannot pay the bill for landing on another's property, even after mortgaging his own properties for half their price, he is bankrupt and out of the game. The last player left in the game is declared the winner. Additional interest in the game is derived from the Go space, which represents the first space on the board, and yields a player $200 each time he passes, the Jail space, to which a player can be sent for up to three turns, and two tax spaces to punish the game's most money-grubbing tycoons. The color of the certificates may vary.