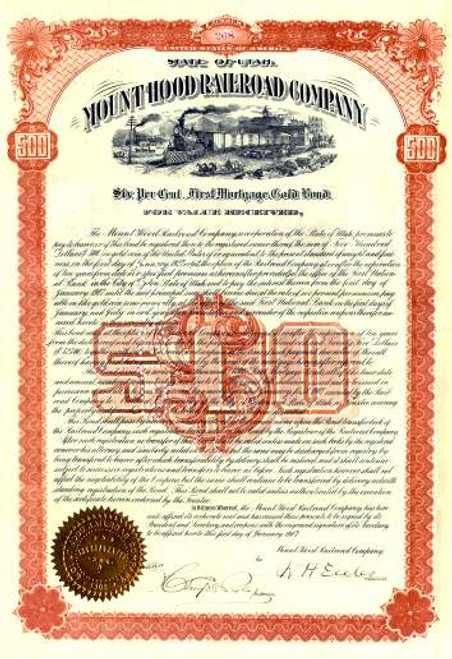 Beautiful Gold Bond Certificate from the Mount Hood Railroad Company issued in 1907. This historic document has an ornate border around it with a vignette of a train leaving the station with a horse drawn wagon trying to quickly cross the track in front of it ( I hope they made it). This item is hand signed by the company's president (W. H. Eccles) and secretary (Henry H. Rolloff) and is over 111 years old. It is also signed on the verso by Mathew S. Browning as trustee, co-founder of the Browning gun company. Browning Arms Company (originally John Moses and Matthew Sandifer Browning Company) is an American maker of firearms and fishing gear. Founded in Morgan, Utah, the company offers a wide variety of firearms including shotguns, rifles, and pistols. Other manufactured sporting goods include sport bows, knives, bicycles, fishing rods, and reels. The company was founded to market the sporting (non-military) designs of John Browning, one of the world's most prolific firearms inventors. Nearly all of John Browning's innovative designs have been manufactured under license by other companies, including Winchester, Colt, Remington, Fabrique Nationale d'Herstal of Belgium, and Miroku. Browning is currently a fully owned subsidiary of FN Herstal. Browning Arms Company is best known for the Browning BPS shotgun, the A-Bolt rifle, X-Bolt rifle, the Auto-5 semi-automatic shotgun, the BAR semi-automatic rifle, and the Hi-Power 9mm pistol. Browning also manufactures a set of trap shotguns in the Cynergy series. Browning sells a variety of non-firearms outdoors products, such as gun safes, knives, shooting accessories, and clothing. Since its beginnings in 1906, the Mt. Hood Railroad has served as an economic lifeline for the Hood River Valley, carrying the region's famous fruit and forest products to market. These days the railroad, officially designated a National Historic Site, rolls through some of Oregon's most beautiful scenery. At each turn of the track, another gorgeous view stretches before you.