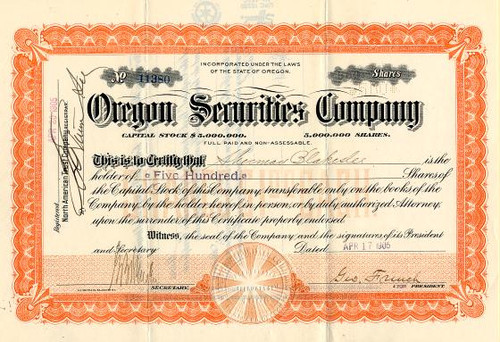 Beautiful certificate from the Oregon Securities Company issued in 1905. This historic document was printed by H.C. Smith & Company and has an ornate border around it. This item has the signatures of the Company's President and Secretary and is over 104 years old. In 1903, the Oregon Securities Company secured control of the Champion, Helena and Musick Mines in the Bohemia mining district and the Oregon and South Eastern Railroad. A 30-stamp mill was constructed at the Champion Mine, as well as related buildings. A post office was established, a 6000 foot tramway was built on a level grade to the Musick, electric and mine power was lined to the complex from the "Warehouse" at Lund Park. The Oregon Securities Company failed in late 1913, and the railroad was re-organized as the Oregon Pacific & Eastern Railway in January 1914.