Beautifully engraved RARE SPECIMEN certificate from the Mullins Body Corporation printed in 1919. This historic document was printed by the Security Banknote Company and has an ornate border around it with a vignette of a man with wings holding a horn. This is the only example of this company's certificate we have seen. 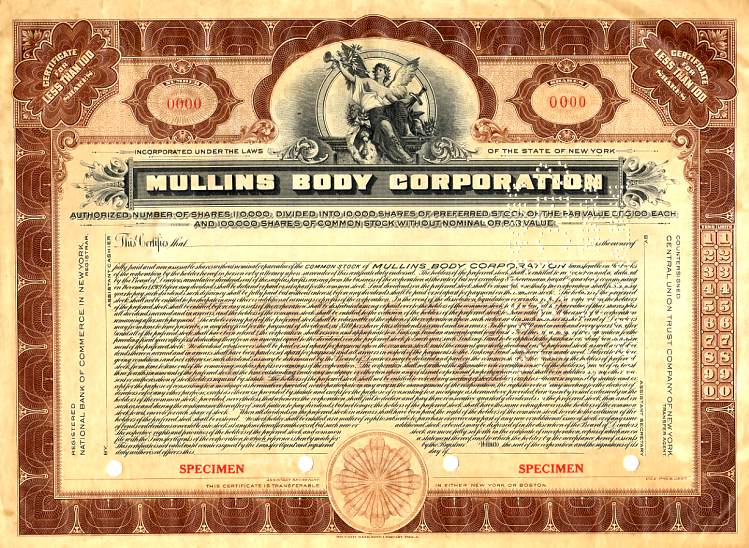 Certificate Vignette
The Mullins Metal Stamping Company, located in Salem, Ohio made all types of products by the metal stamping process. As far back as 1894 they were producing metal roofing, skylites, embossed ceiling panels, all types of architectural building products, elevator cabs and large stamped metal statues that are still seen in parks to this day. In 1906 they started producing stamped steel boats in two sizes, 9' and 15' in length, the 9' boat sold for $50.00 and the 15' for $110.00. In 1911 the company was busy stamping various parts for the many automobile companies that were just starting in business. During World War I, it produced aircraft parts and parts for gas masks. After the war, the demand for statuary and ornamental sheet metal fell off. By 1919, business was devoted almost entirely to stamping bodies and parts for the automobile industry, and the company name was changed to Mullins Body Corporation. In the mid twenties, body stamping declined due to competition and major auto companies developing their own stamping facilities. In 1925, the company developed a new cold process for stamping washing machine tubs rather than the hot process that was previously used. With the decline of their automobile business, the name was changed to Mullins Manufacturing Corporation in 1927. The depression also took its toll on company sales. Company founder W.H. Mullins died in 1932 and at that time the primary products were radiator covers and metal sinks. 1935 saw an end to the metal boats which had been in production since 1906. The Mullins trailer was developed as a a way to produce just another product that could be marketed. It was produced during 1936 and 1937, and sold new for $119.50. From serial numbers on surviving trailers, it is generally agreed upon that a total of approximately 2000 trailers were manufactured. The trailer was not a big success as evidenced by its short two year production. The Company merged with Youngstown Pressed Steel in 1937. About Specimen Certificates Specimen Certificates are actual certificates that have never been issued. They were usually kept by the printers in their permanent archives as their only example of a particular certificate. Sometimes you will see a hand stamp on the certificate that says "Do not remove from file". Specimens were also used to show prospective clients different types of certificate designs that were available. Specimen certificates are usually much scarcer than issued certificates. In fact, many times they are the only way to get a certificate for a particular company because the issued certificates were redeemed and destroyed. In a few instances, Specimen certificates we made for a company but were never used because a different design was chosen by the company. These certificates are normally stamped "Specimen" or they have small holes spelling the word specimen. Most of the time they don't have a serial number, or they have a serial number of 00000. This is an exciting sector of the hobby that grown in popularity and realized nice appreciation in value over the past several years.