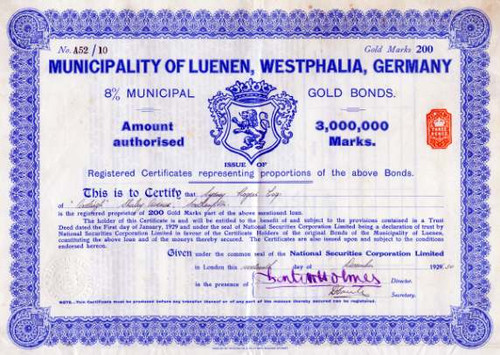 Beautifully engraved certificate from the Municipality of Lunen, Westphalia, and Germany issued in 1930. This historic document was printed by the Bradbury Wilkinson Bank Note Company and has an ornate border around it with a vignette of the German Crest. This item is hand signed by the Director and Secretary and is over 75 years old. 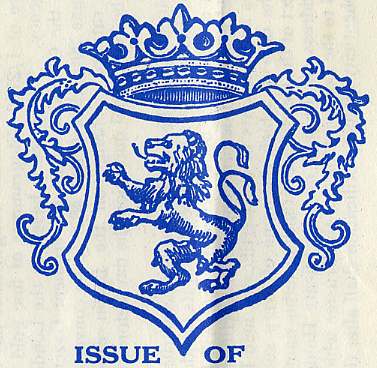 Certificate Vignette
Luenen is a town in North-Rhine Westphalia. That is one of the 16 states of the Federal Republic of Germany. Luenen lies on the threshold between the industrial region of Ruhrgebiet, the Ruhr Region, and the fertile area of Muensterland, a flat rural region taking its name from the city of Muenster, seat of an old university and a charming administrative and cultural centre 45 km north of there. Most of Luenen's 92,000 inhabitants live in the suburbs Altluenen, Wethmar, Brambauer, Horstmar, Niederaden and Luenen-Sued (i.e. South Luenen). The next biggest city is Dortmund, still a major centre of the German steel industry and seat of a university, but also widely known for its many brands of beer and its champion soccer club Borussia Dortmund. Dortmund is some 20 minutes from Luenen by train or car and offers much variety of cultural life to its 580,000 inhabitants and to the people living in near-by smaller towns like Luenen. Luenen itself has much to offer in the way of leisure activities, be they tennis, horse-riding or swimming in any of the two public open-air swimming pools or of its two public baths. Or take gliding: The airfield is situated very conveniently in walking distance of the cozy city centre! Luenen can also boast some of the most beautiful rural scenery, beginning at its northern outskirts and stretching north for dozens of miles of woodland and farmland, offering their well-kept public fairways to the hiker and the cyclist.