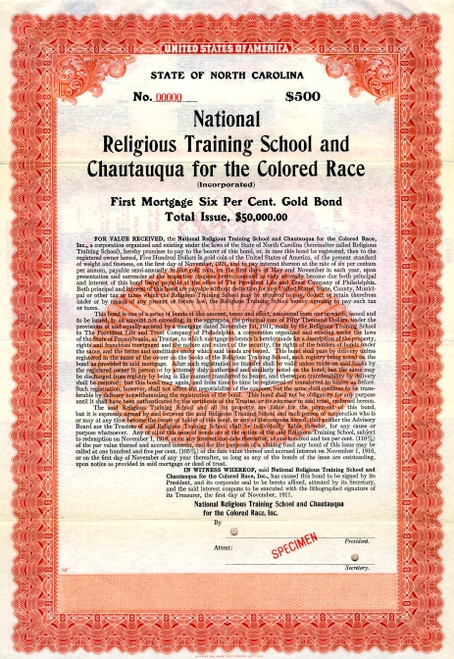 Beautifully engraved RARE Specimen Gold Bond Certificate from the National Religious Training School and Chautauqua for the Colored Race printed in 1911. This historic document was printed by the Franklin-Lee Banknote Company and has an ornate border around it. This item is over 100 years old. Chautauqua (pronounced /ʃəˈtɔːkwə/ shə-TAW-kwə) is an adult education movement in the United States, highly popular in the late 19th and early 20th centuries. Chautauqua assemblies expanded and spread throughout rural America until the mid-1920s. The Chautauqua brought entertainment and culture for the whole community, with speakers, teachers, musicians, entertainers, preachers and specialists of the day.[1] Former U.S. President Theodore Roosevelt was quoted as saying that Chautauqua is "the most American thing in America." Originally named the National Religious Training School and Chautauqua for the Colored Race, NCCU was founded by Dr. James E. Shepard, a pharmacist and religious educator. The institution was chartered in 1909 and opened its doors to students in 1910. In the following years, the school's name became the National Training School in 1915, Durham State Normal School in 1923, North Carolina College for Negroes in 1925 (when it became the nation's first state-supported liberal arts college for African-American students), North Carolina College at Durham in 1947, and finally North Carolina Central University in 1969. NCCU has been a constituent institution of the University of North Carolina System since 1972. Along with other progressives, future U.S. President Woodrow Wilson contributed small private support for the school's founding.[3] The school was sold and reorganized in 1915, becoming the National Training School, and supported by Margaret Olivia Slocum Sage of New York. It became a taxpayer-funded institution in 1923, and was renamed Durham State Normal School. In 1925, it was renamed the North Carolina College for Negroes, the nation's only state-supported liberal arts college for black students.[4] Shepard lobbied the North Carolina General Assembly for support of college; when traveling to lobby the legislature, Shepard traveled by car since the train to Raleigh was divided into segregated sections. Its first four-year college class graduated in 1929. The college was accredited by the Southern Association of Colleges and Secondary Schools as an °AÂ± class institution in 1937 and was admitted to membership in 1957. Graduate courses in the School of Arts and Sciences in 1939, in the School of Law in 1940, and the School of Library Science in 1941. In 1947, the General Assembly changed the name of the institution to North Carolina College at Durham. On October 6, 1947, Shepard, the founder and president, died, and was succeeded in 1948 by Alfonso Elder. Elder remained with the institution until he retired September 1, 1963. Samuel P. Massie was appointed as the third president on August 9, 1963, and resigned on February 1, 1966. On July 1, 1967, Albert N. Whiting assumed his duties as president until his retirement June 30, 1983. The 1969 General Assembly designated the institution as one of the State's regional universities, and the name was changed to North Carolina Central University. Since 1972, NCCU has been a constituent institution of the University of North Carolina system. On July 1, 1972, the stateÂ¯s four-year colleges and universities were joined to become The Consolidated University of North Carolina, with 16 individual campuses, headed by a single president and governed by the University of North Carolina Board of Governors. However, each campus was lead by a separate chancellor and a campus-specific Board of Trustees. Whiting was succeeded by LeRoy T. Walker as chancellor, followed by Tyronza R. Richmond, Dr. Donna J. Benson, Julius L. Chambers (who had previously been director-counsel (chief executive) of the NAACP Legal Defense and Education Fund), James H. Ammons, and on August 1, 2007, Charlie Nelms.History from Wikipedia and OldCompany.com (old stock certificate research service) About Specimen Certificates Specimen Certificates are actual certificates that have never been issued. They were usually kept by the printers in their permanent archives as their only example of a particular certificate. Sometimes you will see a hand stamp on the certificate that says "Do not remove from file". Specimens were also used to show prospective clients different types of certificate designs that were available. Specimen certificates are usually much scarcer than issued certificates. In fact, many times they are the only way to get a certificate for a particular company because the issued certificates were redeemed and destroyed. In a few instances, Specimen certificates were made for a company but were never used because a different design was chosen by the company. These certificates are normally stamped "Specimen" or they have small holes spelling the word specimen. Most of the time they don't have a serial number, or they have a serial number of 00000. This is an exciting sector of the hobby that has grown in popularity over the past several years.