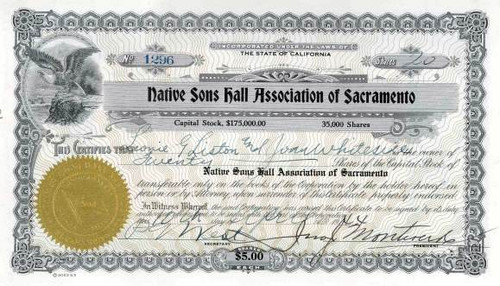 Beautifully engraved certificate from the Native Sons Hall Association of Sacramento issued in 1944. This historic document has an ornate border around it with a vignette of an eagle. This item is hand signed by the Company's President ( John J Monteverde ) and Secretary and is over 58 years old. John J Monteverde of Sacramento was a tea and coffee wholesaler called the J. Monteverde General store located in Sutter Creek. The Native Sons Hall is alos located in the City of Sutter Creek and is several buildings located behind one facade. Sutter Creek was named after John Sutter, the man who hired James Marshall and put him to task on the sawmill in Coloma where gold was discovered. Sutter as early as 1844, had in pursuit of timber, established whipsawing pits and an outdoor manufacturing business named Pine Woods. It was this area near the creek, which runs behind City Hall, that became the site of new and permanent settlement. It is told the settlement started because of a single tent raised there for miners to use on rainy Sundays when they could not get to Jackson or Drytown. That tent, that settlement became Sutter Creek. Today the city's rich history is preserved for all to enjoy. The famous walking tour will take you to 62 historic buildings and sites including the recently reopened Knight Foundry. The famous water-powered foundry, eleventh on "America's Most Endangered Historic Sites" has been in operation since 1872 producing and repairing equipment for hard rock mining all over the west. An additional recent building renovation most certainly worth seeing is the Monteverde Store, erected in 1898, and now the museum and Visitor's Center. Just outside Sutter Creek and Amador City you can visit the newly opened Sutter Gold mine.