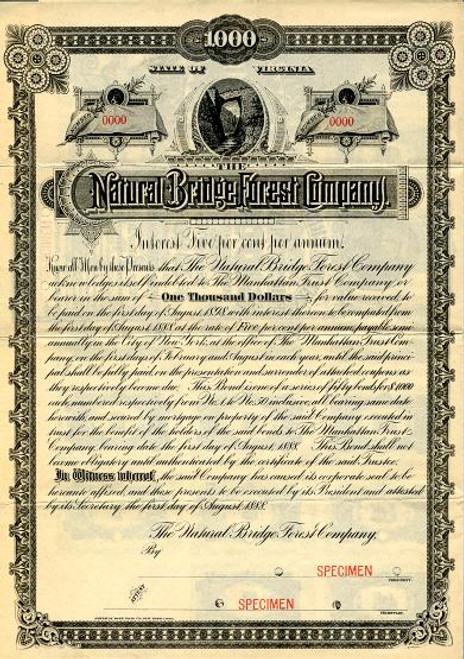 Beautiful engraved RARE specimen certificate from the Natural Bridge Forest Company dated in 1888. This historic document was printed by American Bank Note Company and has an ornate border around it with a vignette of the Natural Bridge. This item is over 119 years old. This is the only example of this company we have seen.

Certificate Vignette
Natural Bridge in Rockbridge County, Virginia is a geological formation in which Cedar Creek (a small tributary of the James River) has carved out a gorge of the limestone mountainous terrain, forming an arch 215 ft (66 m) high with a span of 90 ft (27 m). It consists of horizontal limestone strata, and is the remains of the roof of a cave or tunnel through which the creek once flowed. It is crossed by a public road, U.S. Highway 11. Natural Bridge has been designated a Virginia Historical Landmark and a National Historical Landmark. Natural Bridge is marketed as one of the seven natural wonders of the world, but this refers to a mention on an old list of seven natural wonders of the modern world. The bridge with a person below to indicate the size. Taken in 2005 Recent photo of Natural Bridge in Rockbridge County, Virginia (2002) Full Shot of Natural Bridge (2005)Before the settlers came to the New World, the Natural Bridge was a sacred site of the Native American Monacan Indians. Some believe George Washington came to the site in 1750 as a young surveyor on behalf of Thomas Fairfax, 6th Lord Fairfax of Cameron. To support claims that Washington surveyed the area, some claim initials, "G.W." on the wall of the bridge were carved by the future president. Thomas Jefferson purchased 157 acres (635,000 m²) of land including the Natural Bridge from King George III of England in 1774. Jefferson built a two-room log cabin, with one room reserved for guests, beginning its use as a retreat. Natural Bridge was one of the wonders of the new world that Europeans visited during the 18th and 19th centuries. Vacationing guests from all over the world took day trips from Natural Bridge on horseback or horse drawn carriages to explore the countryside. In 1833, a new owner erected the Forest Inn to accommodate the increasing number of people. The bridge had considerable notoriety during the 19th century. Herman Melville alluded to the bridge in describing Moby Dick: "But soon the fore part of him slowly rose from the water; for an instant his whole marbleized body formed a high arch, like Virginia's Natural Bridge..." William Cullen Bryant, another American literary figure, said the bridge and Niagara Falls were the two most remarkable features of North America. During the 1880s Natural Bridge attained resort status under the ownership of Colonel Henry Parsons through the Natural Bridge Forest Company . The Drama of Creation, a sound and light show depicting the seven days of creation as told in the Bible in the Book of Genesis, was inaugurated by U.S. President Calvin Coolidge in 1927. Phineas Stevens, a celebrated lighting engineer, had designed and installed an impressive system of lighting which at night transformed the Bridge and glen. Musical accompaniment was added to form a moving drama of creation, interpreted by some of the greatest symphonic compositions of all time and vocal music of unusual quality and appeal. The outdoor program is held each evening at dusk under the Natural Bridge, subject to seasons and weather. History from Wikipedia and OldCompanyResearch.com. About Specimens Specimen Certificates are actual certificates that have never been issued. They were usually kept by the printers in their permanent archives as their only example of a particular certificate. Sometimes you will see a hand stamp on the certificate that says "Do not remove from file". Specimens were also used to show prospective clients different types of certificate designs that were available. Specimen certificates are usually much scarcer than issued certificates. In fact, many times they are the only way to get a certificate for a particular company because the issued certificates were redeemed and destroyed. In a few instances, Specimen certificates we made for a company but were never used because a different design was chosen by the company. These certificates are normally stamped "Specimen" or they have small holes spelling the word specimen. Most of the time they don't have a serial number, or they have a serial number of 00000. This is an exciting sector of the hobby that grown in popularity over the past several years.