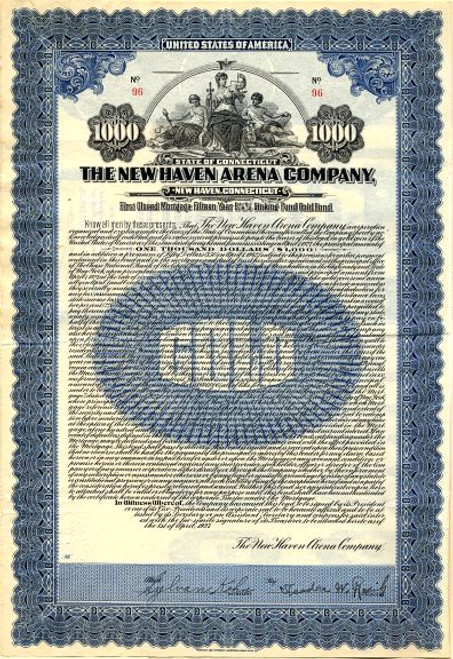 Beautiful uncancelled $1000 Gold Bond certificate from the New Haven Arena Company issued in 1927. This historic document was printed by American Banknote Company and has an ornate border around it with a vignette of a group of allegorical people. This item has the hand signatures of the Company's President and Secretary and is over 82 years old. This is the first time we have had this certificate for sale. 20 interest coupons attached on right side that has the printed signature of Maurice Podoloff as Treasurer

Certificate Vignette
The New Haven Arena was an indoor arena on Grove Street in New Haven, Connecticut that served as a venue for ice hockey, concerts and circuses. The first arena opened in 1914 but burned down in 1924. The new arena was built in 1926 and held over 4,000 people. The Arena hosted the American Hockey League's New Haven Eagles from 1936 to 1951, the New Haven Blades of the Eastern Hockey League from 1954 to 1972 and Yale Hockey from 1914 to 1917 (at the first Arena) and from 1927 to 1959. The Rolling Stones, the Kinks, Bob Dylan, Joan Baez, the Supremes, the Temptations and many music icons of the 1960s held concerts at the Arena. Jim Morrison, of the Doors, was arrested for obscenity here on December 9, 1967 after mocking a cop during a performance of "Back Door Man". The event was memorialized in the song Peace Frog. The site of the arena is now the headquarters of the New Haven Division of the FBI. The Arena was replaced by the New Haven Coliseum in 1972. History from Wikipedia and OldCompany.com (old stock certificate research service)