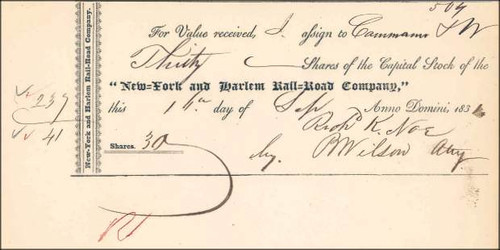 Historic share assignment certificate from the New=York and Harlem Rail=Road Company issued in the 1831. This document is hand signed and is over 177 years old. In 1831, Abraham Brower supplemented his local stagecoach business by running omnibus lines on the streets of Manhattan. In 1832, the New York & Harlem Railroad Company built the nation's first horsecar line along Fourth Avenue in Manhattan The Harlem Line, formerly part of the New York Central System, began in 1831 with a charter to run from 23rd Street to the northern tip of Manhattan. At that time, 23rd Street was too far north for most people, so the charter was changed to start the line at Prince Street. Two decades later, the line reached 131 miles north to Chatham where it connected with the Boston and Albany line.