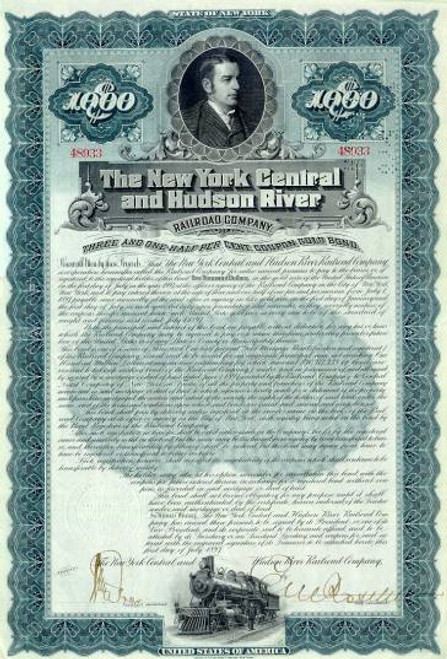 Beautifully engraved Certificate from the famous New York Central and Hudson River Railroad Company issued in 1897. This historic document was printed by the American Banknote Company and has an ornate border around it with a vignette of Cornelius Vanderbilt, Jr. This item is hand signed by the company's officers and is over 113 years old. In 1867 Vanderbilt acquired control of the NYC, with the help of maneuverings related to the Hudson River Bridge in Albany. On November 1, 1869 he merged the NYC with his Hudson River Railroad into the New York Central and Hudson River Railroad. This extended the system south from Albany along the east bank of the Hudson River to New York City, with the leased Troy and Greenbush Railroad running from Albany north to Troy. Vanderbilt's other lines were operated as part of the NYC; these included the New York and Harlem Railroad, Lake Shore and Michigan Southern Railway, Canada Southern Railway and Michigan Central Railroad.