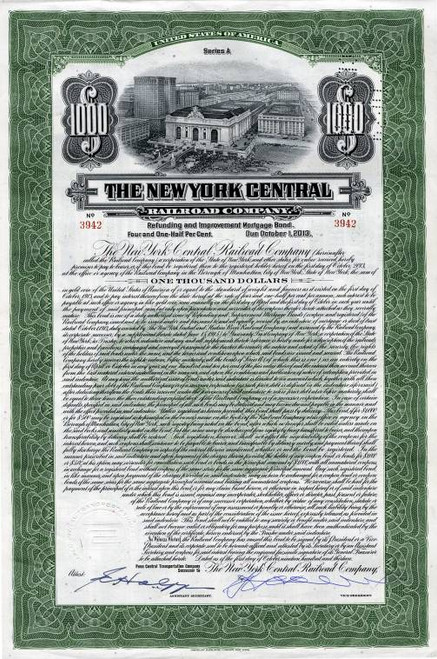 Beautifully engraved certificate from the New York Central Railroad Company issued in 1913. This historic document was printed by the American Banknote Company and has an ornate border around it with a vignette of New York City's, Grand Central Station. This item is hand signed by the Company's Vice President and Assistant Secretary and is over 100 years old. Over 50 coupons attached. 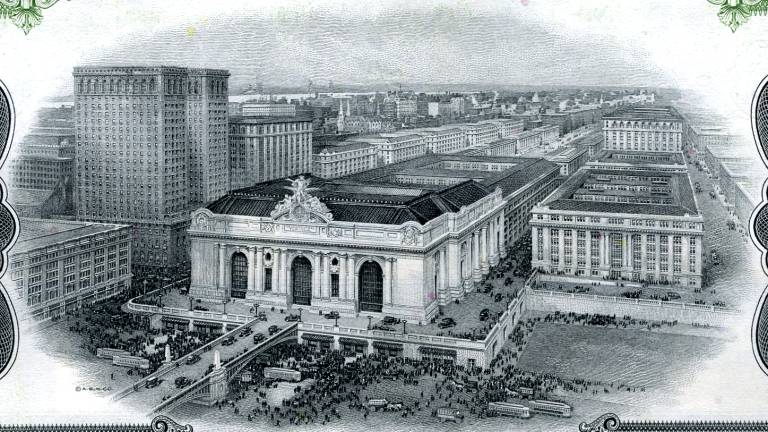 Certificate Vignette
Grand Central Terminal (GCT)--colloquially called Grand Central Station, or shortened to simply Grand Central--is a commuter rail terminal station at 42nd Street and Park Avenue in Midtown Manhattan in New York City, United States. Built by and named for the New York Central Railroad in the heyday of American long-distance passenger rail travel, it is the largest train station in the world by number of platforms:[3] 44, with 67 tracks along them. They are on two levels, both below ground, with 41 tracks on the upper level and 26 on the lower, though the total number of tracks along platforms and in rail yards exceeds 100. The terminal covers an area of 48 acres (19 ha). The terminal serves commuters traveling on the Metro-North Railroad to Westchester, Putnam, and Dutchess counties in New York State, and Fairfield and New Haven counties in Connecticut. Until 1991 the terminal served Amtrak, which moved to nearby Pennsylvania Station upon completion of the Empire Connection. Although the terminal has been properly called "Grand Central Terminal" since 1913, many people continue to refer to it as "Grand Central Station", the name of the previous rail station on the same site, and of the U.S. Post Office station next door, which is not part of the terminal. It is also sometimes used to refer to the Grand Central 42nd Street subway station, which serves the terminal. The New York Central Railroad (reporting mark NYC), known simply as the New York Central in its publicity, was a railroad operating in the Northeastern United States. Headquartered in New York, the railroad served most of the Northeast, including extensive trackage in the states of New York, Pennsylvania, Ohio, Michigan, Indiana, Illinois, and Massachusetts, plus additional trackage in the Canadian provinces of Ontario and Quebec. The railroad primarily connected greater New York and Boston in the east with Chicago and St.Louis in the midwest along with the intermediate cities of Albany, Buffalo, Cleveland, Cincinnati, and Detroit. NYC's Grand Central Terminal in New York City is one of its best known extant landmarks. In 1968 the NYC merged with its former rival, the Pennsylvania Railroad, to form Penn Central (the New York, New Haven and Hartford Railroad joined in 1969). That company went bankrupt in 1970 and was taken over by the federal government and merged into Conrail in 1976. Conrail was broken up in 1998, and portions of its system was transferred to the newly formed New York Central Lines LLC, a subsidiary leased to and eventually absorbed by CSX and Norfolk Southern. Those companies' lines included the original New York Central main line, but outside that area it included lines that were never part of the New York Central system. CSX was able to take one of the most important main lines in the nation, which runs from New York City and Boston to Cleveland, Ohio, as part of the Water Level Route, while Norfolk Southern gained the Cleveland, Ohio to Chicago, Illinois portion of the line called the Chicago line. At the end of 1925, the New York Central System operated 11,584 miles of road and 26,395 miles of track; at the end of 1967 the mileages were 9,696 and 18,454.