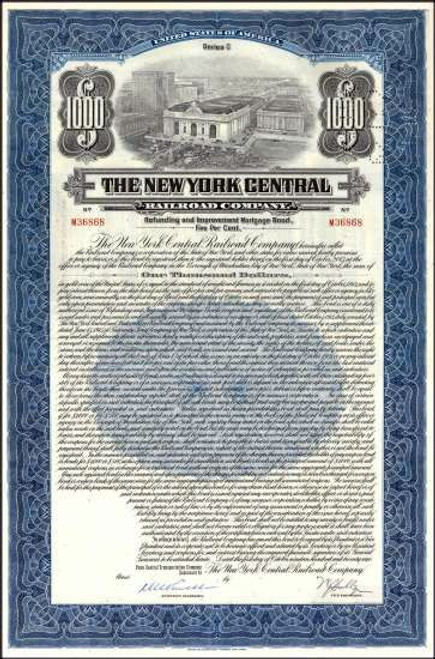 Beautifully engraved certificate from the New York Central Railroad Company issued in 1921. This historic document was printed by the American Banknote Company and has an ornate border around it with a vignette of New York City's Grand Central Station. This item is hand signed by the Company's Vice President and Assistant Secretary and is over 85 years old. Over 50 coupons attached. The bond was due in 2013 and was payable in Gold Coin. 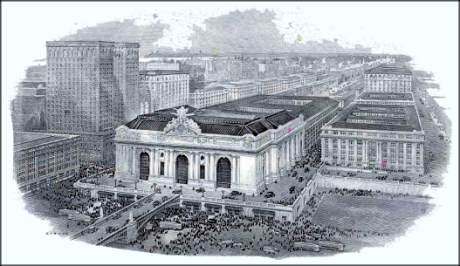 Certificate Vignette
In 1864, Cornelius Vanderbilt acquired the New York and Harlem Railroad. He next acquired the rundown Hudson River Railroad, which Cornelius wanted to consolidate with the Harlem. Vanderbilt acquired the Central Railroad in 1867, merged it with the Hudson River Railroad by legislative act, and leased the Harlem to the new company. He spent large sums of money improving the lines' efficiency and then increased the capital stock by $42 million (which was a stockwatering operation of magnitude) and paid large dividends. In the first five years, he is said to have cleared $25 million. Vanderbilt finally hit a snag in 1867 when he attempted to gain control of the Erie Railroad, then in the hands of his old adversary, Daniel Drew. Again Vanderbilt bought all the stock offered for sale, but this time Drew threw 100,000 shares of fraudulent stock certificates on the market, which Vanderbilt continued to buy. Drew and his cohorts fled to Jersey City to avoid prosecution and bribed the New Jersey legislature to legalize the stock issue. Vanderbilt, tottering on the brink of failure, lost millions on the coup but fought back. Although the illegal stock was finally authorized by the legislature, Vanderbilt lost between $1 -$2 million and forgot the Erie. Upon the insistence of Vanderbilt's son William, he extended his line to Chicago by acquiring the Lake Shore and Michigan Southern railroads, the Canadian Southern, and the Michigan Central thereby creating one of the greatest American systems of transportation. Vanderbilt's influence on national finance was stabilizing. When the panic of 1873 was at its worst, he announced that the New York Central was paying out millions of dividends as usual, and let contracts for the building of the Grand Central Terminal in New York City, with four tracks leading from it, giving employment to thousands of men. He saw to it, however, that the city paid half the cost of the viaduct and open-cut approaches to the station. By 1875, his New York Central Railroad controlled the lucrative route between New York and Chicago.