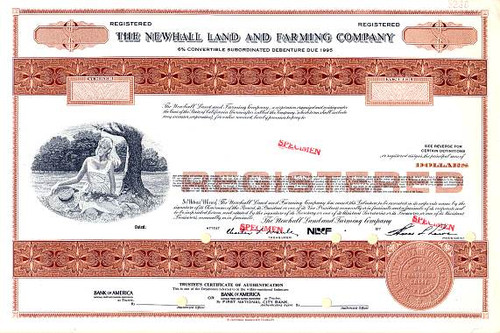 Beautifully engraved certificate from the Newhall Land and Farming Company issued no later than 1979. This historic document was printed by the Jeffries Banknote Company and has an ornate border around it with a vignette of a girl under a tree. This item has the printed signatures of the Company's President and Secretary, and is over 28 years old. 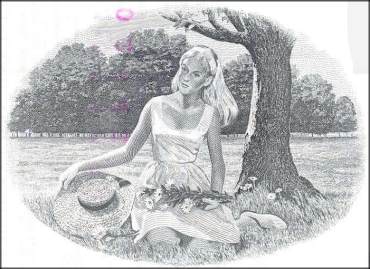 Certificate Vignette
Newhall Land & Farming Company is engaged in the development of residential, industrial and commercial real estate, and in agriculture, on its approximately 50,000 acres in California. The Company's primary business is developing new towns and master-planned communities in north Los Angeles County. The Company's real estate properties are located in Valencia and Newhall Ranch, Los Angeles. Valencia is home to approximately 42,000 residents and over 1,400 companies. Newhall Ranch permits 21,600 homes in five villages and 325 net acres of commercial and business park uses. The Company's agricultural properties are the New Columbia Ranch in the San Joaquin Valley, and the Newhall Orchard in Ventura County. History The story of The Newhall Land and Farming Company echoes the growth of California. It is a story of developing the many uses of land and keeping it productive. From the grazing of livestock, the Company has moved to the growing of grain and fruit, vegetables and cotton. It has extracted the land's bounty in the form of sand and gravel, oil and natural gas. Finally, portions of that land have given birth to a master-planned community, with homes, schools, parks and industry. Henry Mayo Newhall of Saugus, Massachusetts was 24 and already a successful auctioneer when, in 1849, he joined the many thousands who rushed to California to find gold. Unsuccessful in the gold fields, his talents as an auctioneer and later involvement in San Francisco's first railroad paid off. He invested his earnings in ranches throughout California. With his death in 1882, Newhall left his five sons six California ranches totaling 143,000 acres and a wish that the land not be sold. The brothers incorporated their inheritance as The Newhall Land and Farming Company on July 1, 1883. In the late 1950s, California's growth rate and the Los Angeles economy were booming. Urban development began moving northward into the Santa Clarita Valley. As development occurred, the county tax assessor began to assess farmland at its highest and best use - as residential. The Newhall Family understood then that their farming operations would be increasingly compromised by surrounding development and higher taxes. Members of the Newhall Family resisted the idea of selling raw land to residential builders. They felt strongly about the ranch and wanted to see something built on it of which they could be proud. They chose to build a "new town," a balanced community named Valencia for the oranges grown on the ranch. The Valencia Master Plan was drafted in the early 1960s with the creative guidance of the renowned urban planner Victor Gruen, and with significant help from the Planning Director of Los Angeles County. The Master Plan was adopted by the County Planning Commission in 1965 and today is well recognized as a premier new town. The Newhall Land and Farming Company (a California limited partnership) owns 51,620 acres devoted to real estate and agricultural operations. Its primary business is developing master-planned communities. Newhall Ranch, its next new town and Valencia together form one of the nation's most valuable land holdings - 36,000 acres, 30 miles north of downtown Los Angeles. Its partnership units are traded on the New York and Pacific Stock Exchange (NHL). The above history was obtained from the company's website.