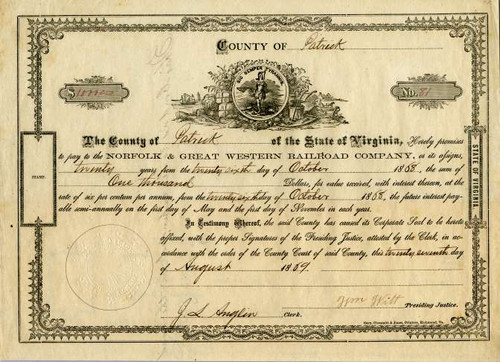 Beautiful certificate from the Norfolk & Great Western Railroad Company issued in 1869. This historic document was printed by the Gary, Clemmitt & Jones - Richmond, Virginia and has an ornate border around it with an image of The Virginia State Seal. This item has the signatures of the Presiding Justice, William Wilt and Clerk, and is over 146 years old.

Certificate Image
The Norfolk and Western Railway (N&W) (reporting mark NW), a US class I railroad, was formed by more than 200 railroad mergers between 1838 and 1982. It had headquarters in Roanoke, Virginia for most of its 150 year existence. The company was famous for manufacturing steam locomotives in-house at the Roanoke Shops as well as their own hopper cars. Around 1960, N&W was the last major American railroad to convert from steam to diesel motive power. In December 1959 N&W merged with long-time rival Virginian Railway in the Pocahontas coal region and grew even more in size and profitability by mergers with other rail carriers including Nickel Plate Road and Wabash in adjacent areas to form a system serving 14 states and the Canadian province of Ontario, between the Atlantic Ocean and the Mississippi River and Great Lakes. At the end of 1970 N&W operated 7,595 miles of road on 14,881 miles of track, including P&WV but not including AC&Y, CW, the Dereco roads, Lorain & West Virginia, NJI&I and NF&D. In 1982 the Norfolk & Western Railway was combined with the Southern Railway, another profitable carrier, to form the Norfolk Southern Corporation (NS), but it continued paper operations until it was merged into the Southern (by this point renamed Norfolk Southern Railway) in 1997. History from Encyberpedia and OldCompany.com (old stock certificate research service)