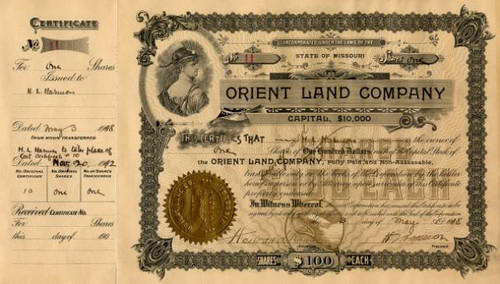 Beautifully engraved certificate from the Orient Land Company issued in 1918. This historic document has an ornate border around it with a vignette of an allegorical woman who has a shining star beaming from the top of her cap. This item is hand signed by the Company's President ( H. L. Harwon ) and Secretary ( Howard Ross ) and is at least 85 years old. 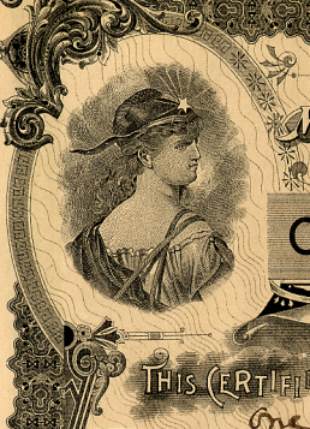 Certificate Vignette
HAMLIN, TEXAS. Hamlin is on U.S. Highway 83 in northwest Jones and northeast Fisher counties. It was established in anticipation of construction of the Kansas City, Mexico and Orient Railway. R. D. Moore conveyed land to the Orient Land Company in 1902. Town organization followed in 1905. Hamlin was named for Orient official W. H. Hamlin. The Orient reached Hamlin in 1906 and was followed by the Texas Central Railroad within a couple of years and by the Abilene and Southern in 1910. Only the Orient, later a part of the Santa Fe, has survived. The Kansas City, Mexico & Orient Railway was organized by Arthur Stillwell to build a railroad from Kansas City to the Pacific at Topolobampo, Mexico. Santa Fe purchased the line on August 1, 1929.