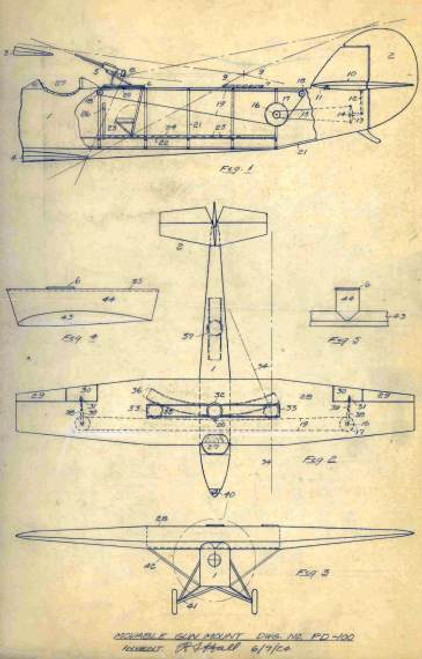 Original Airplane pencil hand drawing made by early Aircraft Designer Randolph Fordham Hall. The drawing was also signed by him and dated June 7, 1924. The document has three different drawings of an early monoplane aircraft; one from a top angle and one from a side angle, and one from the front. At the bottom of the drawing it says "Movable gun Mount" DWG No PD-100 (signed by )inventor R.H. Hall. This drawing was used for one of Hall's many patents while he was working for the Thomas Morse Aircraft Corp. RANDOLPH HALL 1896-1974 Randolph Fordham Hall was an aeronautical engineer and inventor, began work as a draftsman at the Thomas Brothers Airplane Co (1915-16) and moved to Standard Aeronautical Corp as an engineer (1917). He enlisted in the US Army Air Service Technical Service (1917-19), advancing to the rank of sergeant first class. During this time he attended the American Expeditionary Forces University in Dijon, France, where he earned degrees in mathematics and mechanical engineering. He returned to the US, becoming an assistant engineer at the Thomas Morse Aircraft Corp. (1920-28) before joining Francis E. Cunningham and James C. Dryer to form Cunningham-Hall Aircraft Corp. (1928-41). He left Cunningham-Hall to join Bell Aircraft Corp. (1941-59) where he remained until he retired. Hall received over forty patents during his career, including a patent for a high lift wing which flew on Cunningham-Hall's entry in the Guggenheim Safe Airplane Competition of 1929. History from Smithsonian Institution Air and Space Museum Randolph Hall came from the old Thomas-Morse Aircraft Corp to form Cunningham-Hall Corp, a subsidiary of the carriage and automobile firm of James Cunningham, Son & Co, founded in 1838. Hall brought a group of aviation specialists with him and within a year had produced the first aircraft, the PT-6. After experimenting with high-lift devices, Hall designed GA-21 in 1934. By 1936, after extensive modifications, including the change from from side-by-side to tandem seating and a cleaned-up landing gear, the design became GA-36. The ship was all-metal construction except for the fabric covered emmpennage, ailerons and flaps, and part of the upper wing surface. Stabilizer was adjustable and the ailerons, which had only upward movement, were located in the upper surface of the wings above the flaps. Except at the wing tips, the flaps went full span. The special high-lift wing had a vane aft of the lower leading edge that opened inward, allowing air to enter the wing and flow over the lowered flaps, thus increasing their effiency at low airspeeds. This system operated automatically, and extensive testing proved its effectiveness, but was more complicated and less efficient than the newly developed Fowler flaps. Coupled with the weight of the wing and overall robust construction, it made the GA-36 somewhat slower and more expensive than other aircraft of its class. Proposed further modification to correct those deficiencies were not carried out, and the aircraft was not put into production