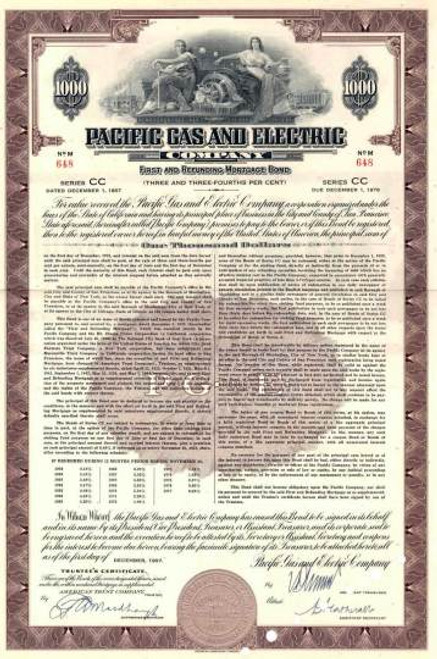 Beautifully engraved $1,000 Bond certificate from the Pacific Gas and Electric issued in 1957. This historic document was printed by the American Banknote Company and has an ornate border around it with a vignette of two allegorical women flanking a electric generator with a power plant and damn in the background. This item is hand signed by the Company's Authorized Officer, Assistant Treasurer and Assistant Secretary and is over 48 years old. 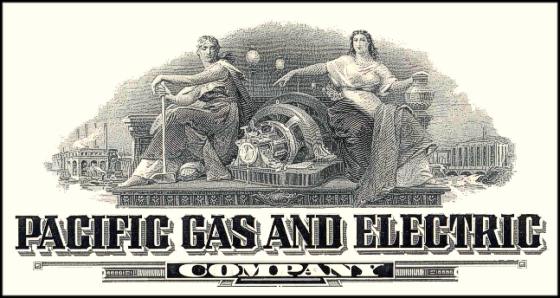 Certificate Vignette
Pacific Gas and Electric Company is in the middle of the greatest Electric Utility calamity since the 1930's. California has seen rolling blackouts, bankruptcy, failed deregulation plans, a conflict of interest scandal, huge increases in power costs, and Gray Davis patting himself on the back. On April 6, 2001, Pacific Gas and Electric Company file for Bankruptcy under Chapter 11 of the U.S. Bankruptcy Code, a section that allows a financially troubled business to freeze debt payments so that it can reorganize its affairs. While other types of bankruptcy filings seek to have a company's assets sold and creditors paid in full, Chapter 11 permits a company to continue operating while it creates a plan for paying off creditors. The filing stops PG&E's existing creditors -- ranging from bondholders to independent energy suppliers -- from demanding payment or suing to take the utility's assets. It also allows PG&E to incur new debt by giving new lenders priority over existing creditors. And it gives the utility a chance to reorganize its business by, for example, selling property, merging with another utility, cutting back its operations or reducing its debt. Southern California Edison and Pacific Gas and Electric say they've lost nearly $14 billion since June 2000 to high wholesale prices the state's electricity deregulation law bars them from passing on to consumers. PG&E, saying it hasn't received the help it needs from regulators or state lawmakers, filed for federal bankruptcy protection April 6. Electricity and natural gas suppliers, scared off by the companies' poor credit ratings, are refusing to sell to them, leading the state in January to start buying power for the utilities' nearly 9 million residential and business customers. The state is also buying power for a third investor-owned utility, San Diego Gas & Electric, which is in better financial shape than much larger Edison and PG&E but is also struggling with high wholesale power costs. The Public Utilities Commission has approved average rate increases of 37 percent for the heaviest residential customers and 38 percent for commercial customers, and hikes of up to 49 percent for industrial customers and 15 percent or 20 percent for agricultural customers to help finance the state's multibillion-dollar power buys. Pacific Gas and Electric Company (PG&E) is a wholly owned subsidiary of PG&E Corporation and maintains its headquarters in San Francisco, California. There are 21,500 employees who carry out PG&E's primary business--the transmission and delivery of energy. The company provides natural gas and electric service to approximately 12 million people in Northern and Central California, or about one in every 20 Americans. Our service area covers 70,000 square miles. PG&E and other utilities in the state are regulated by the California Public Utilities Commision. The CPUC was created by the state legislature in 1911. San Francisco-based PG&E has been hurt by soaring deregulated wholesale prices and a California rate freeze that prevented the company from passing on higher costs to customers. The company serves about 4.3 million electric and 3.6 million gas customers through regulated utility Pacific Gas and Electric, which had recently filed for bankruptcy protection. PG&E has been divesting the bulk of its power generation assets in its utility territory (Central and Northern California). It sold gas operations in Texas and some fossil-fuel and geothermal plants, and plans to auction off its California hydroelectric plants (it still owns the Diablo Canyon nuclear plant) and sell its retail energy commodities business.