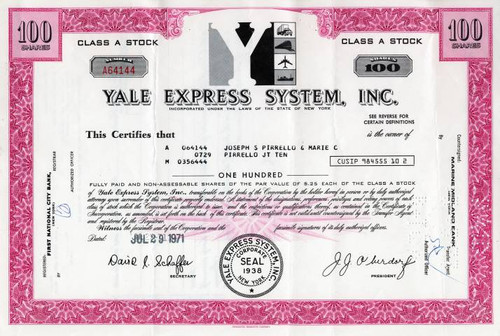 Beautiful certificate from Yale Express System, Inc issued in 1971. This historic document was printed by the Federated Banknote Company and has an ornate border around it with the company's logo on top center. This item has the printed signatures of the Company's President, and Secretary, and is over 43 years old. 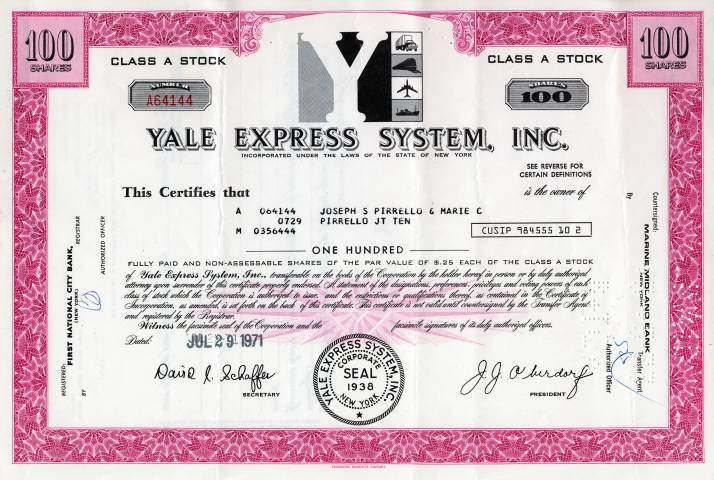 Certificate
This was a infamous case where there was a lack of Ethics and Independence between independent consulting services and the independent auditors. The following is part of a prepared statement of Douglas R. Carmichael for Securities and Exchange Commission Hearings on Release No. 33-7872 (July 26, 2000) In the larger firms, consulting services are provided by a separate group of professionals who have little interaction with audit teams other than to urge cross-selling of services. The separation between consultants and auditors within the same firm has existed for many years and has grown over that time. For example, another of the alleged instances of independence impairment investigated by the Cohen Commission was the Yale Express (Fischer v. Kletz) case. The Cohen Commission concluded there was a deplorable subordination of the audit function in that case. While providing consulting services, the audit firm learned that financial statements on which it had expressed a clean opinion were materially misstated, yet failed to notify anyone for several months. The firm argued it had no duty to inform anyone because the consulting service was a separate engagement performed as a consultant and not an auditor. This case is an extreme example of separation of consulting and auditing, but the attitudes it reflects still prevail in current practice. The case is taught in advanced accounting, law and auditing classes as an example of a conflict of interests which led to the company's bankruptcy and many defrauded shareholders.