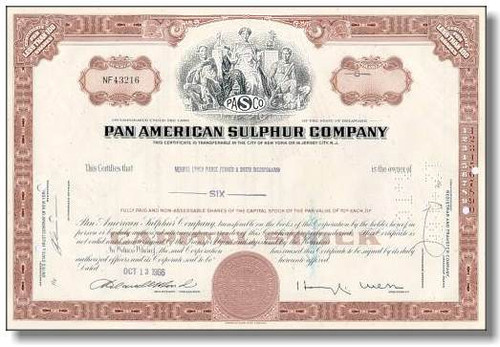 Beautifully engraved Certificate from the Pan American Sulphur Company issued in 1966. This historic document was printed by the American Banknote Company and has an ornate border around it with a vignette of allegorical figures with the Company Logo in the Center. This item has the printed signatures of the company's officers and is over 39 years old. Several prominent Dallas businessmen, including Roland S. Bond, Buddy Fogelson, and Guy I. Warren, organized the Pan American Sulphur Company of Mexico in 1947, a business in which Parten was active until its liquidation in 1976. Under his stewardship as chairman of the board, Pan American developed and operated at JÃ¡ltipan, Vera Cruz, Mexico, one of North America's most prolific and profitable sulfur mines. Pan American eventually developed into a major international sulfur company active in European and North American markets.