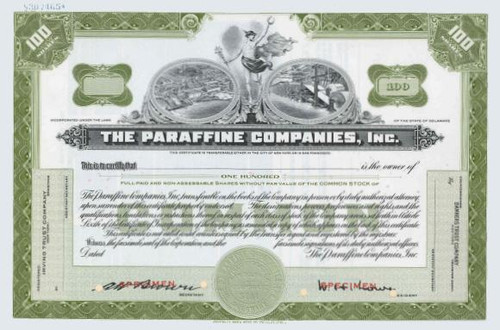 Beautifully engraved specimen certificate from the Paraffine Companies Inc. printed in the 1930's. This historic document was printed by the Security Banknote Company and has an ornate border around it with vignettes of an allegorical man holding a torch and views of the company's factory. This item is over 60 years old. Paraffine Companies name was changed to Pabco in 1950, and changed once again to Fibreboard Paper Products in 1956. Fibreboard Paper Products shortened their name to Fibreboard Corporation in 1956.

Certificate Vignette
June 24, 1999 Justices Throw Out $1.5 Billion Asbestos Settlement, Citing Possible Conflict of Interest The Supreme Court today set aside a $1.5 billion landmark settlement that was to have resolved the claims of as many as 186,000 victims of asbestos poisoning against the Fibreboard Corporation, one of the leading makers of products using the fire-retardant substance. The Justices concluded that the lawyers for the claimants had a possible conflict of interest: getting the most for their clients and striking a quick deal that would garner huge legal fees. They also found that in approving an agreement that would have sharply limited any other lawsuits brought against Fibreboard, the lower court had failed to consider that there was almost certainly more money available for the claims, because Fibreboard was only contributing $500,000, with its insurers putting up the rest. Fibreboard was sold to Owens Corning in 1997 for $515 million.