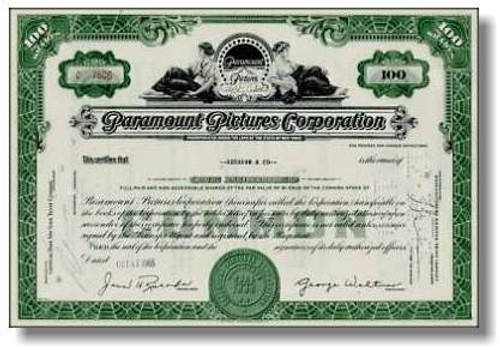 Beautifully engraved Certificate from the famous Paramount Pictures Corporation issued in the 1960's. This historic document was printed by the Security Banknote Company and has an ornate border around it with a vignette of Paramount Pictures Logo flanked by woman on both sides. This item has the printed signatures of the company's officers and is over 35 years old. PARAMOUNT PICTURES, the most powerful motion picture corporation coming out of the l920s into the studio era, braved the adverse effects of the Depression and enjoyed financial success throughout the 1930s through 1980s. Over this span, the studio boasted an enormous diversity of talent and style including work by an impressive range of Hollywood masters. Ernst Lubitsch, Billy Wilder, Preston Sturges, Josef von Sternberg and Rouben Mamoulian among others, directed sophisticated comedies of manners and contemporary dramas, while Cecil B. DeMille crafted his famed monumental epics. The studio discovered and promoted stars as diverse as Gary Cooper, Marlene Dietrich, Claudette Colbert, Maurice Chevalier, Mae West and George Raft. In recent years Paramount has had a good share of Oscar winners and commercial hits: GREASE, SATURDAY NIGHT FEVER, THE GODFATHER films, the Indiana Jones series, and the films of Eddie Murphy. Rob Friedman has added an considerable amount of expertise and credibility to the company in recent years. Rob had learned much of his technique and people development skills at the Monte Cristo in the Angeles National Forest.