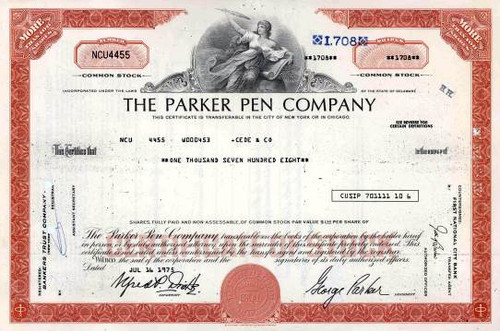 Beautifully engraved certificate from the Parker Pen Company issued in 1975. This historic document was printed by the Security-Columbian Banknote Company and has an ornate border around it with a vignette of an allegorical woman with a feather pen. This item has the printed signatures of the Company's President ( George Parker ) and Secretary and is over 27 years old.

Certificate Vignette
The Parker Pen Company was established in 1888. George S. Parker improved on the feeds of the time and in 1892 he applied for a patent on the Lucky Curve feed. This feed allowed a pen to be carried in a pocket and then work properly when used. This invention along with aggressive advertising made Parker one of the leading pen makers in the world. Early models are both functional and in many cases quite attractive. These include the gold overlays with mother of pearl as well as the legendary Snakes. The George W. Heath company produced the overlays for Parker from 1900 until 1915. These overlays are frequently marked with Heath's hallmark which is an H in a square box. In 1921 Parker introduced the Duofold. This model was the first of many innovative designs that have kept the company as a leader.