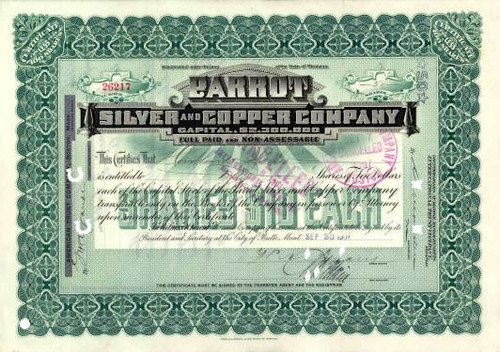 Beautifully engraved certificate from the Parrott Silver and Copper Company issued in 1907. This historic document was printed by the John A. Lowell Banknote Company and has an ornate border around it. This item is hand signed by the Company's President and Secretary and is over 110 years old. The Parrott is located on Butte's Southern belt on the Gangon-Parrot lode. The mine was discovered in 1864 by Dennis Leary, George W. Newkirk and the Porter Brothers. It was named after the Hon. R. R. Parrott, a local attorney. The complex ore removed from the mine was carried by wagon to Corrine, Utah to be shipped by rail to eastern smelters. Locally, experiments began to try to smelt the Parrot ore. Joseph Ramsdale and William J. Parks erected a small blast furnace in Town Gulch in 1866-67, but were unsuccessful. Charles E. Savage constructed a horse-powered arrastra that successfully treated the ore, but was financially a failure. In the fall of 1868 Dennis Leary and the Porter Brothers built a blast furnace that used a blacksmith bellows, but they were stymied by their lack of knowledge on metal fluxes. Discouraged, the mine owners looked elsewhere and the mine languished (Daly 1929; Warren 1896). William Parks was unwilling to give up on the mine. He continued to pour his own labour and limited money into the shaft. Because he capitalized his operation with paychecks from his own day-labour, progress was slow. His efforts were justified when he reached the 155-foot level when he hit paying ore. He had discovered Butte's first copper mine. He was also very lucky; the Parrott turned out to be the only mine in Butte with copper ore above the 200-foot level. The mine was patented in May of 1879 by Dennis Leary, J. A. Talbott and Thomas Irvine. From the time of Park's discovery, the mine continued to grow; by 1889 the Parrott Silver & Copper Company was removing 260 tons of copper/silver ore a day. The 3-compartment shaft was reported to be the best ventilated shaft in Montana. By 1893, 101 underground miners had sunk the shaft to a depth of 900 feet using Fraser & Chalmers hoisting engine. Four years later, the Parrott employed 195 men underground and 33 men on the surface. Below the 400-foot level, the Parrott boasted Montana's only 4-compartment shaft. In 1900, the shaft reached to 1,600 feet with 170 men underground and 118 on the surface. Connections were driven to the nearby Neversweat mine at the 1,000 and 1600--foot levels, to the Nipper at the 1,000-foot level and the Original No. 6 at the 1,000-foot level. Hoisting was accomplished using a 2,500-horsepower Union Iron Works engine. By 1906 the work force increased again to 220 men and the depth of the shaft reached 2,400 feet. The Parrott operated two compressor plants together capable of operating 100 drills (Weed 1912; Hogan 1892; Byrne 1901). The Parrot vein continued for almost 2,000 feet uninterrupted. Erubescite was the primary ore; pyrites were rare and of little consequence. The vein was composed of 30 percent copper and it was reported in 1885 that all the three previous year's ore averaged 12 percent copper. As a bonus, above the waterline at 800 feet, ore contained 2/3 ounce silver for every percentage copper (Emmons 1897; Peters 1885; Weed 1912). While the Parrot Silver & Copper Company continued to operate the mine, it became part of the Amalgamated holdings in May of 1899. The next year, Amalgamated boosted production quotas from 1.25 million pounds per month to 2 million pounds of ore per month. Later in the year the surface buildings, especially the hoist house, were damaged by fire. By October, a temporary hoist (fire-proof) of equal power and capacity was on line. The damaged head-frame was replaced with a 100-foot steel structure similar to the Diamond and High Ore head-frames. Other structures and equipment were also upgraded. During this period of primary production, 1884 to 1910, miners extracted almost 300 million pounds of copper from the Parrott (Western Mining World 1899 - 1900). The Parrott mine was acquired by ACM Co. in 1910 during its most important period of consolidation. The 100-foot steel headframe was removed and the shaft was converted into a concrete-lined air intake. The wooden headframe that straddles the Parrott shaft today, constitutes the only remaining headframe of its type on the Butte hill, although it was not the original headframe and was built around 1910. The Parrott was one of Butte's top copper producers during the district's period of national significance, 1880 to 1920 (Montana Inspector of Mines Report 1889; 1893; 1897; 1900; 1905-06; Report of the Director of the Mine 1885; Gidel 1944). Information from the Montana Department of Environmental Quality.